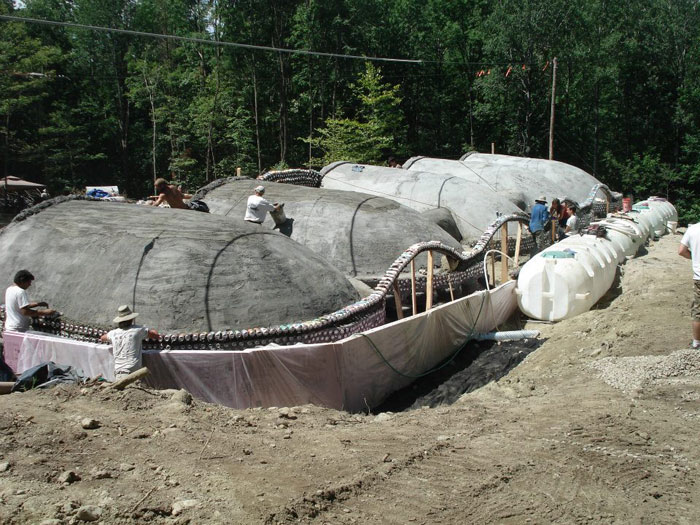 Its load-bearing walls are made of discarded tires filled with sledgehammer-rammed dirt, lined up and stacked eight feet high to form a U-shaped wall that could stop a truck in its tracks (which you certainly can’t say for traditional wood-framed housing). Traditional concrete and rebar tie all the structural elements into the undisturbed earth below. Non-bearing walls are formed with the help of recycled cans and bottles spaced evenly to form a honeycomb matrix amongst paddies of hand-placed cement that keeps walls standing up. Because they rely on super-simple masonry techniques they can be (and often are) formed into any size or shape the builder desires. This freedom from linearity leads to the curvy forms that give many Earthships their organic appearance.

A vaulted and super-insulated concrete roof is topped by a north-sloping layer of ProPanel metal sheets that catch rainwater and feed it into two cisterns placed behind the tire wall. The water tanks are buried in a massive earth berm and connected to a Water Organizing Module packed with pumps and filters that make the caught water suitable for all indoor use. Showers drain into a greywater system that feeds planters for food production in the greenhouse; the greywater ends its life cycle when it’s filtered again and pumped into toilet bowls for flushing. Shit turns the greywater into blackwater, which is flushed into a traditional septic tank, broken down anabolically, and eventually drained into a rubber-lined outdoor planter used for growing trees and produce. And yes, they’ve tested that food, and the stuff harvested there contains less E. coli than the stuff you’ll find at the grocery, as long as it’s not grown directly in the soil (think apples and grapes, which filter out waste with long stems, not rootsy stuff like carrots or potatoes).

Like planets, Earthships revolve around the sun. They are oriented for maximum solar exposure, which means they face south in the northern hemisphere and north in the southern hemisphere. A greenhouse is faced by latitudinally-adjusted sloped glass, which provides maximum insolation for both plants and solar panels — both the photovoltaic (electricity-generating) and thermal (hot water-generating) kinds. Heated glycol runs through tubes in the hot water heater and, when it’s cold, the roof, for melting snow.

The greenhouse acts as a heat buffer between the outside climate and indoor livable spaces, so it’s usually hot and ideal for plants to thrive in there. Behind another glass barrier are the bedroom, bathroom, and living rooms. Heat is stored in the huge amount of thermal mass created by the earth berm and the rammed-earth tires: they act as thermodynamic batteries, transferring stored heat into the living spaces when it’s cold. The A/C is my favorite part of an Earthship: 30-foot metal tubes run through the earth berm, and when a super-hot skylight in the greenhouse is opened, convection sucks air through them and through the rooms. It makes for a pleasant breeze when you want it, powered by the constantly cool 58 degrees of the earth.