Embracing radically sustainable living allowed Craig and Connie Cook to sail into early retirement aboard an earthship, a type of home that offers environmental benefits only paralleled by the savings offered to its residents’ bottom lines. 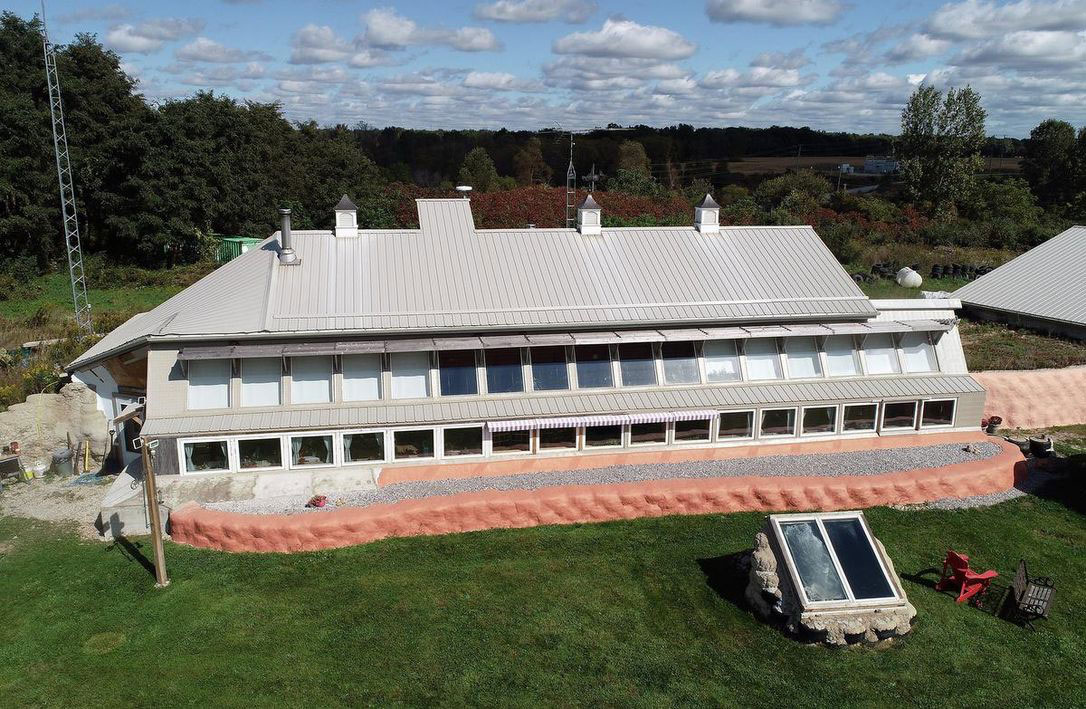 “We would still be working,” Craig said. “We left at 55 because we have no bills.”

A lack of heating, electrical and water bills for their home, coupled with a lack of ongoing construction and maintenance costs, allowed the Cooks to build what they envision as their forever home for $70,000, and minimize monthly expenditures in the process.

But taking the earthship from the concept of a passive solar house designed for New Mexico by a visionary American architect, to a 100-acre farm in Norfolk County had its fair share of challenges.

Now, the Cooks are using their success in adaptation to help others looking to chart a similar course.

In broad terms, earthships are homes constructed with recycled materials around the capacity to collect, store and recycle their own water, heat themselves, generate their own power, produce food, and handle their own waste.

Recycled tires pounded full of earth act as construction blocks, finished with a coat of parge mortar and other framing options, under a beam-supported roof. Perpendicularly aligned to the winter solstice with windows angled at 60 degrees to provide maximum sunlight potential during the fewest hours of daylight, heating is achieved via solar absorption into and gradual release from interior thermal mass. 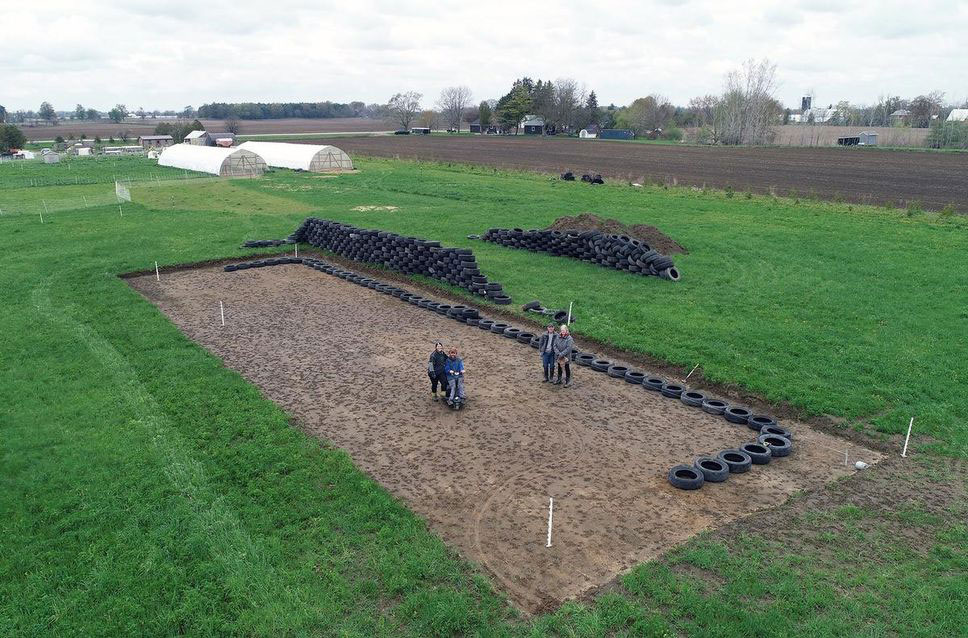 Ken Stock and Paula Martin (centre, left) have laid the foundation for their 2,000-square-foot earthship on their 13-acre Oakland-area farm, inspired and supported by pioneers Craig and Connie Cook (centre, right) who live in their own near Clear Creek.

Temperature consistency is enhanced through insulation, including berming at the structure’s sides and rear. Convection-based air circulation is channeled through a centralized vertical cooling chimney, also adding a measure of temperature control.

The Cooks’ roughly one kilowatt per day electricity requirement is generated through a 7.5-kilowatt solar panel system, powering a high-efficiency fridge and freezer, or for operating their flat-screen TV and computer.

Meals are prepared on a combination wood-propane stove and oven, and while they prefer a clothesline, a propane dryer stands by if required.

Rainwater is captured from the roof, up to a year’s supply stored in a subterranean cistern and filtered for drinking and household use. Grey water recycled through an in-house planter, along with the use of a composting toilet, limits the couple’s total daily household usage to six gallons, a fraction of the Ontario average. 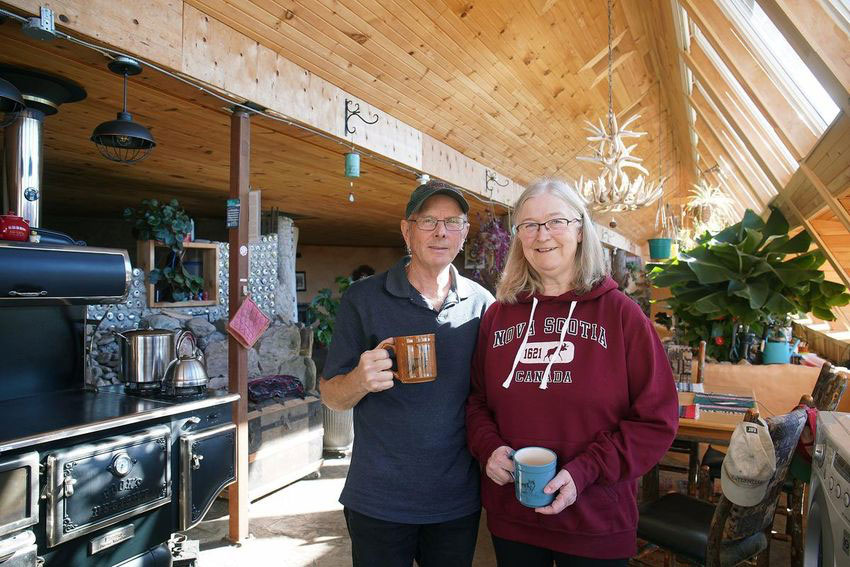 The Cooks’ environmentally sustainable journey began over a cup of coffee on their previous Cornell-area property’s porch with a conversation around the feasibility of harnessing the wind’s power. Inspired by Scotsman Hugh Piggott’s experience designing and building homemade wind turbines, the Cooks’ construction of their own led to their website name (windchasers.ca, which documents their journey) and hosting workshops for like-minded individuals.

Against a backdrop of accelerating climate change and growing passion for environmental activism, they sought out a rural property suited for an evolving residential vision embracing solar power for production consistency and comparative ease of installation and maintenance.

Initially, they considered a straw-bale house, but opted for the elevated environmental efficacy of an earthship — along with the potential to do a majority of the work themselves. The Cooks purchased a 100-acre farm near Clear Creek, Norfolk County, late in 2005, receiving building permits for the region’s first earthship in November 2008.

Part of the three-year delay was official unfamiliarity. Earthships are a new concept, Craig concedes. Pushing through certification was a matter of patience, perseverance and, crucially, appropriate architectural and engineering documentation, a process requiring between $8,000 and $10,000 — “and time.”

Subsequent earthship permitting and construction in Norfolk just a kilometre north of the Cooks by someone else went far more smoothly based on their groundbreaking efforts.

“‘It’s just like the Cooks’ house? … go ahead,’” Craig paraphrased. 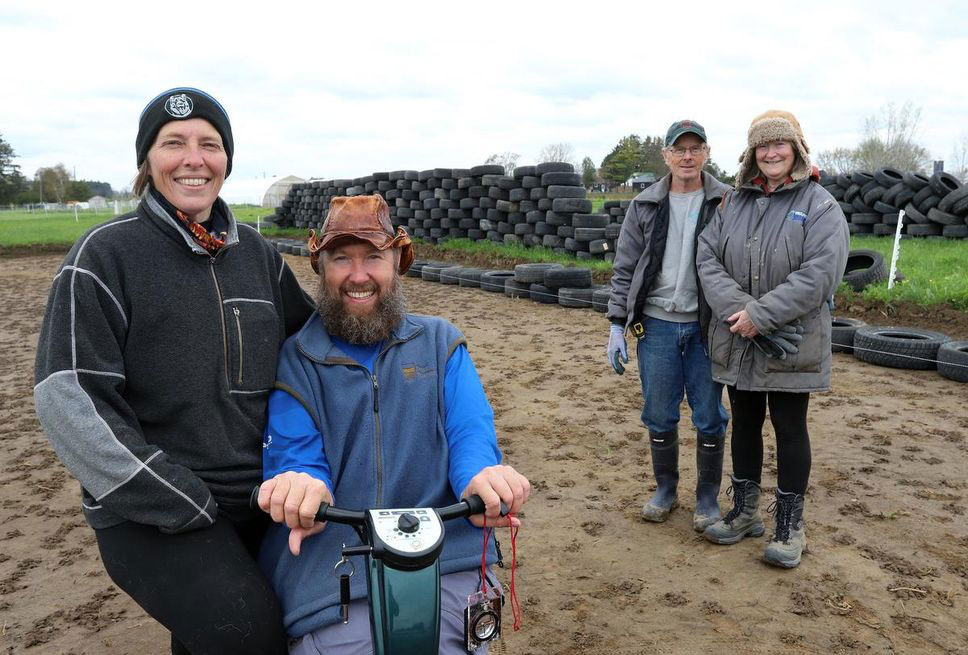 He and Connie began laying out their earthship in 2009, working sporadically, initially on alternate weekends. If the couple has one regret it was the long-distance nature of their earlier construction relationship, a part-time approach helping stretch move-in to pre-Christmas 2012.

There is also unavoidable physical time and work required in construction, beginning with the basis of pounding 1,200 tires full of earth. Craig jokes their 2,800-square-foot home is worth $1 million — $70,000 in materials and $930,000 in he and Connie’s hands-on labour.

“It’s a lot of work,” says Craig. “And a lot of things you’ve never done before.”

And while an earthship may not be for everybody, it is an option open to anybody with the appropriate will, desire and adequate support.

“There’s a lot of people who want to live that way, but who don’t want to go through the process,” Ken Stock said. 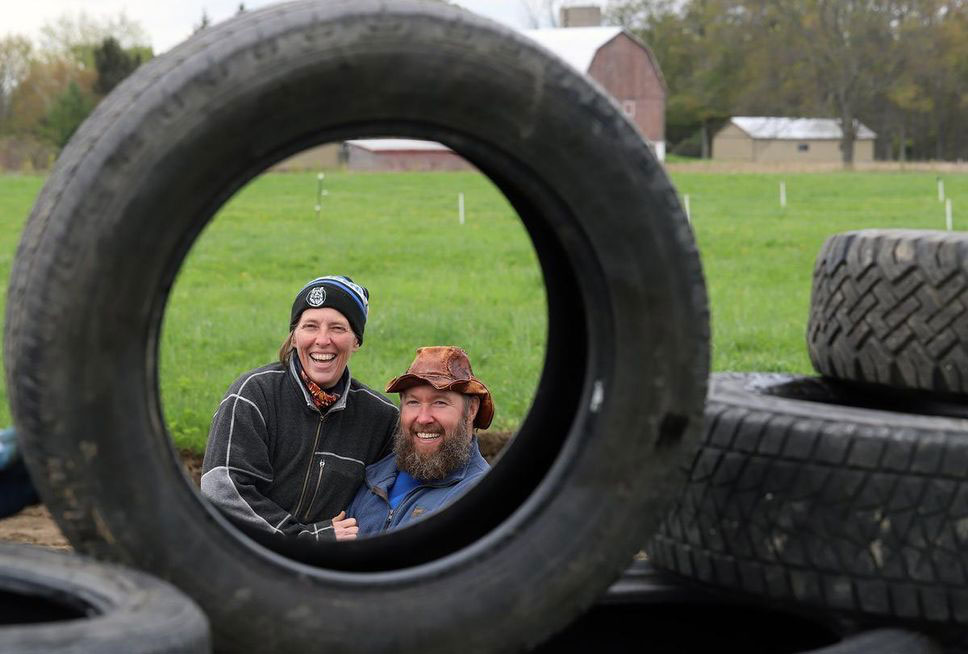 Stock and partner Paula Martin have accepted physical and inspirational support from the Cooks to start on their own earthship journey.

Stock was introduced via a nephew’s connection to wind turbine workshops.

“That led to earthships.”

Courage to “be different, be themselves” led Stock and Martin away from the security of traditional careers to what Stock describes as a “peasant farmer” lifestyle on a 13-acre Oakland-area property in Brant County.

“We raise food and crops for ourselves and sell the excess,” explained Stock, who was diagnosed with cerebral palsy at birth.

They have persevered through their own pioneering building permit journey with the County of Brant, prepared for a venture Martin is “excited, sometimes a little anxious” to embark upon. 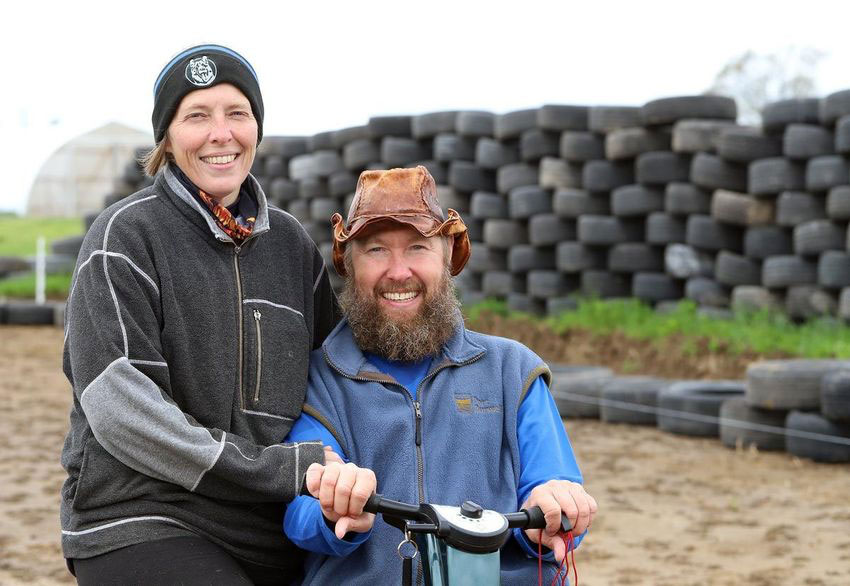 “I thought (Stock) was crazy,” admitted Martin, ultimately embracing their own 2,000-square-foot earthship following a site visit to the Cooks’ unique living space. “The longer we thought about it, the more sense it made.”

Earthship construction is possible given their complementary abilities, projected help from family and friends, and, perhaps most importantly, the Cooks’ presence as mentors, guides, a font of information “and encouragement,” without which they would not have seriously considered it, credits Stock.

“We can do it,” Martin concluded.

EARTHSHIP FOR THE EARTH

The fiscal advantages of the Cooks’ earthship are easily quantifiable, but its esthetic contributions to physical and mental quality of life should not be underestimated.

Connie’s green thumb and its environmental fertility are underlined by a diverse range of flora, including bananas ripening in the planter.

Joining the Cooks at their rustic live log dining table for a cup of coffee they have grown, dried, ground and brewed on-site brings some small taste of the environmentally friendly calm that has descended upon their previously hectic lives. 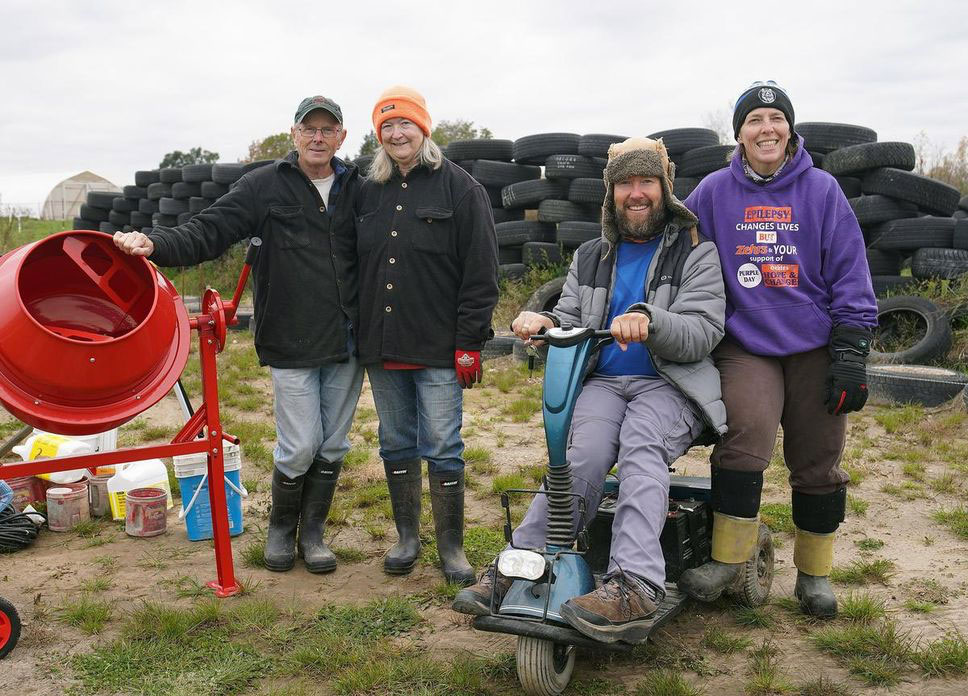 “We sit there and just look at the world,” Connie smiled.

That world view includes consideration that, in a climate emergency, more people could or even should be embracing environmentally friendly design and construction — choices that don’t preclude “normal” life.

“This just proves people can build houses a lot better than they are right now,” says Craig.

FROM NEW MEXICO TO SOUTHERN ONTARIO

American architect Michael Reynolds pioneered the earthship for the deserts of New Mexico. And what he originally designed for that climate isn’t the same as what an earthship needs in Norfolk County.

One crucial dividend from the Cooks’ measured approach to their earthship journey was the “Canadianization” of Reynolds’ original design criteria; elementary modifications reflecting climactic disparities between the founder’s New Mexico home and southern Ontario.

Reynolds recognized earthships would need geographical adaptation, says Craig Cook, which is what he and his wife Connie have done.

“Craig and Connie have done a lot to make things work for here,” said Ken Stock, who is building an earthship with his partner under the tutelage of the Cooks.

Latitude is the most obvious divide between the two locations, an equation including both colder temperatures and less hours of winter sunlight.

In response, the Cooks added thermal mass to their earthship’s interior for additional solar absorption, striving to retain this advantage through upgraded insulation. Because of three-sided berming and the requirement for windows in the front, the effort is concentrated in the second-floor attic.

Their approach translates into a one-degree temperature swing in October between evening and mornings — 21 C in the day, 20 C first thing in the morning — and in the winter, a two-degree swing.

“We’re striving for a consistent temperature, and we’re getting really close to it,” says Craig.

Their earthship requires no furnace for heat and will sustain itself without assistance, but does feature a small wood stove, traditionally lit by choice on Dec. 25 and a couple of other occasions annually.

“It’s Christmas,” Craig explained. “We light it because we want to.”

The third major modification is increased ventilation responding to increased humidity or moisture in the air, compared to New Mexico’s arid climes.

“You need to keep the air moving,” says Craig, whose design incorporates additional windows with the capacity to open and close.