Zurich is leading the way in recycling concrete

How Zurich Blazed a Trail for Recycled Concrete.

The Swiss city requires recycled concrete to be used in the construction of public buildings. Now other cities are following its lead.

As more and more new buildings are erected around the world, one city in Europe is trying to make the concrete jungle a bit greener. 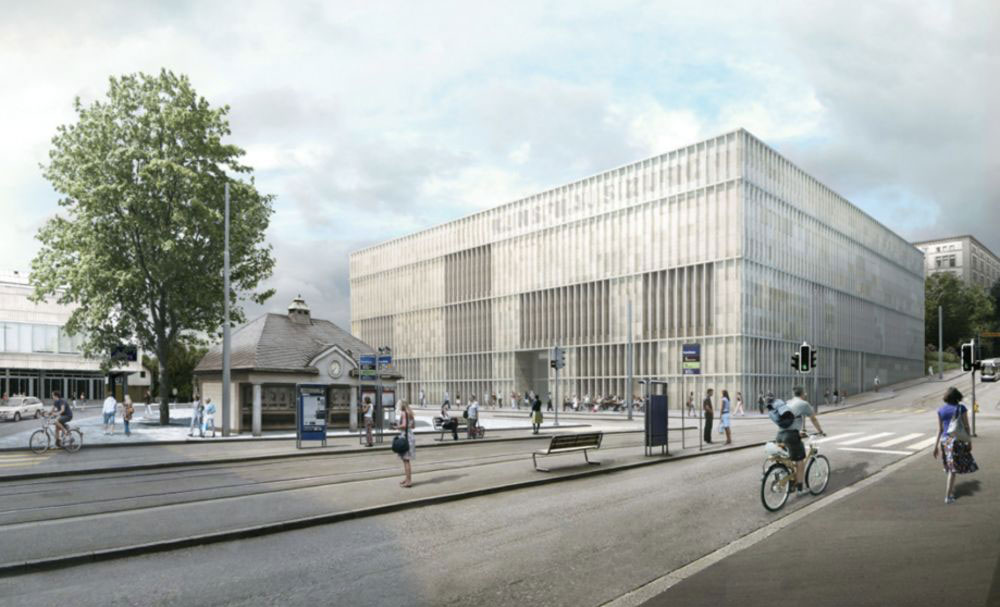 Inspired by a public debate about two decades ago on how to reduce the amount of gravel that’s extracted and used in construction, Switzerland’s largest city has become a trailblazer for more sustainable construction. It built its first building with recycled concrete — a school building where 80% of concrete used had come through the recycling process — as far back as 2002. Three years later, it introduced a requirement that all publicly-owned buildings have to be made using recycled concrete. In 2013, the city went a step further to mandate the use of Co2-reduced cement. Now other cities are starting to take note, adopting practices that have been standard in Zurich for more than a decade.

These green measures are timely. Concrete, the most commonly employed man-made material on the planet, is a major contributor to climate change. The production of cement — concrete’s main ingredient along with sand, gravel and water — is estimated to be responsible for about 6% to 8% of global emissions. In a world where ongoing industrialization and urbanization is predicted to boost global construction by 35% by 2030, researchers are seeking to reduce this potentially growing footprint through recycling or by using other materials.

Concrete’s emissions are so high because the main raw material for cement  is calcinated limestone, which needs extremely high temperatures — approximately 1,450 degrees Celsius (2,642 degrees Fahrenheit) — for its production. The calcination process creates a substance called clinker that is later ground down to fine particles.  Carbon emissions are a byproduct of both the chemical reaction the limestone undergoes (accounting for approximately 60% of its total emissions) and the fuel combustion needed to power the process.

Over the last three decades, it has become common practice to replace some of the clinker with materials like slag, a waste leftover from metal smelting, or fly ash, or through recycling demolition waste. In Switzerland, the use of burnt oil shale as a substitute in cement has been more prevalent. The increased use of calcined clay will likely be an additional solution as the amount of available slag and fly ash around the world is declining. The Swiss cement industry has reduced its Co2 emissions resulting from the use of fossil fuels by more than two thirds since 1990.

In Switzerland, concrete needs to contain at least 25% recycled material — demolition waste — in order to be classified as recycled. The rate of clinker content in a final Co2-reduced cement product depends on the type of cement, but can range from a clinker factor of below 50% to more than 70%.  Zurich has employed these greener materials widely in new municipal buildings. The city’s main art museum, Kunsthaus Zurich, is being extended using 98% recycled concrete, while the proportion of the material for a new hospital and several housing complexes has reached 95%. 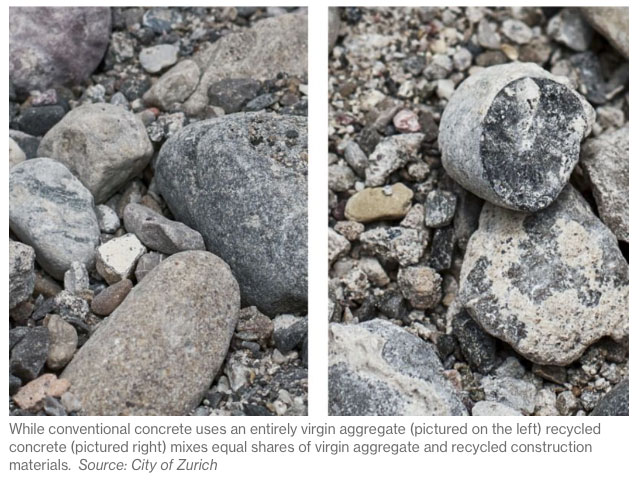 This approach has saved around 17,000 cubic meters (22,200 cubic yards) of virgin materials and landfill space with recycling concrete in buildings alone, according to a case study published in 2019.

The strategy is attracting interest from other cities. Zurich hosted experts from Rome and Helsinki keen to learn about the material in 2019, reflecting a rise in interest for green construction.

“In countries that are compact and have a high population density, where you don’t have to go long distances between demolition sites and new buildings, what we’ll have in Europe is recycling becoming absolutely routine, because it’s absolutely the way we have to go,” Karen Scrivener, a professor at the Ecole Polytechnique Fédérale in Lausanne, who leads research at the Laboratory of Construction Materials.

Holcim Ltd., a Swiss maker of concrete and cement, is seeing demand grow in the U.S. as well. In the U.S., Holcim points to the construction of a dormitory at Georgetown University in Washington, D.C., and Boston University’s new computing and data sciences center that’s due to be completed in 2022 as projects involving green concrete. In Europe, Berlin decided in 2019 that public building plans, such as schools, daycare centers or administration buildings should generally be constructed using recycled concrete. In an earlier project in 2007,  One Coleman Street, a 180,000 square feet, 10-story office development in London’s financial center, was built using stent and fly ash, bringing the overall recycled content of the main structural concrete to about 50% by mass.

While Zurich has been pioneer in the sustainable construction space, there is no such rule for non-municipal builders, because there’s legally no way to dictate what material to use. From a price perspective, recycled concrete costs are roughly the same as virgin concrete, though green cement can come with slightly higher costs due to additional investments in research and development.

“The biggest obstacle to a more widespread use of recycled concrete is awareness,” says Armin Grieder, the head of engineering at Zurich’s building surveyor’s office. “Some architects, planners and engineers aren’t yet convinced, and believe it requires more of an effort in the building process. That’s not the case, it’s just not standard material, and more people need to understand it better.”

There are, however, limitations on the materials’ sustainability. While dismantling and processing demolition waste is more sustainable than mining virgin gravel in quarries, recycled concrete may be linked to longer transports. The 2019 case study concluded that the use of recycled concrete only makes sense from an energy perspective when it’s available from within a 25 kilometer (15 mile) radius of the construction site.

This, however, is the case in the greater Zurich area, and the city’s increased demand for recycled concrete has led to to producers offering more recycled construction materials. It’s one sign there  is room for urban policy makers to push the market toward higher recycling rates, by following Zurich’s example and implementing requirements.

“There may one day be a requirement to use recycled concrete for certain purposes more broadly,” Grieder said. “That would be conceivable and desirable.”