Wildfire, in one way or another, touches nearly everyone who lives in California and, increasingly, the West.

Those of us living in California last fall can recall awakening to orange skies and smoke that blanketed nearly the entire state. Even if our home was untouched, we experienced the effects of wildfire. We inhaled them. We swiped them off our car in white, singed flakes. We dread them now.

More than 2.7 million Californians live in places with a high or extremely high risk of wildfire, as of 2007. That number is expected to increase, as the state is now updating its Fire Hazard Severity Zone maps. Since the maps’ creation, California has gotten hotter, drier, more populated and experienced its largest and most destructive wildfires in recorded history.

Wildfire has hit home in other ways, too. More than 200,000 people living in wildfire-prone areas received notice in 2019 that their insurance carrier would no longer be covering them. Too risky. There’s a moratorium on those non-renewal notices now, but the threat of insurance loss remains for millions of people.

Some people left. California reported a net loss of 135,600 people last year, for a variety of reasons. But most people stayed — nearly 40 million.

How do you make your home where disaster is a given? How do you learn to live with it?

Those questions are at the root of Michele Barbato’s research. He co-directs the UC Davis Climate Adaptation Research Center and is a professor of structural engineering. He’s trying to find ways to build affordable homes that can withstand most of what the planet throws their way.

“I started with some colleagues looking at a new way of building,” Barbato said. “We ended up looking back at a very ancient solution — something that’s been around for more than 10,000 years.”

That “technology” was mud, or rather an engineered form of it called compressed and stabilized earth blocks. 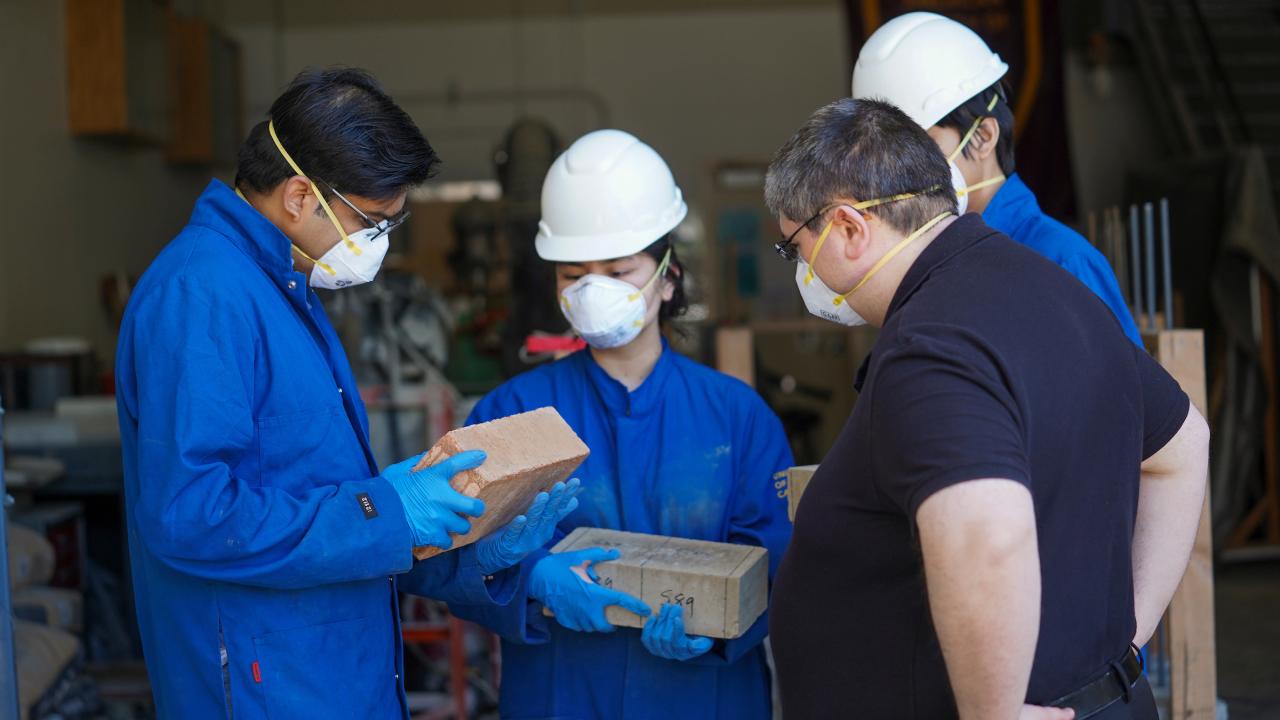 From Native American cliff dwellings in Colorado to Mali’s ancient Mosque of Djenné, mud and adobe structures have withstood the test of time. That is, when they don’t crumble in earthquakes and hurricanes. A key difference is structurally sound engineering, Barbato said.

Made onsite with primarily soil and water, earth blocks emerged in the 1960s as an energy-efficient and eco-friendly means of construction. Barbato and colleagues have been working to understand and improve earth block performance for all manner of climate and disaster challenges.

As a faculty member at Louisiana State University, he tested it for hurricanes, tornadoes and earthquakes. The tests demonstrated that, when engineered correctly, compressed and stabilized earth blocks can withstand magnitude 7 earthquakes, Category 5 hurricanes and rate-3 tornadoes without endangering lives.

When Barbato moved back to California in 2018, the need to expand this research to wildfire quickly became apparent.

Barbato had only been a professor at UC Davis for two months when the Camp Fire in nearby Paradise broke out. It would become the state’s deadliest and costliest wildfire to date. While Davis homes weren’t at risk, the region’s residents were still impacted because where there’s fire, there’s smoke.

“When homes burn in a wildfire, the things burning are not just wood, and what is not just wood is really making it worse.”
— Michele Barbato, structural engineering professor

“I could not breathe coming out of the house,” he said, adding that the smoke triggered an allergic reaction. “When homes burn in a wildfire, the things burning are not just wood, and what is not just wood is really making it worse.”

The smoke carried not only the ashes and particles of trees, but of houses, cars, metals and toxins. And while emission factors for different types of wood are available, little is known about emissions from burning homes.

“Many would say we knew nothing about it,” Barbato said. “I was working on this material for almost 10 years, and I know soil doesn’t burn. It was kind of like adding two and two.”

Barbato is now principal investigator on a grant, “Assessment and Mitigation of Wildfire Induced Air Pollution,” from the UC Office of the President. The project features collaborators from two national laboratories, a non-governmental organization and multiple UC campuses. Part of the project includes quantifying the carbon dioxide and other emissions released when homes burn relative to the air quality benefits when homes — and everything inside them — do not burn.

The work joins a growing body of research at UC Davis investigating the health impacts of urban wildfire smoke.

“We know that wildfire smoke from forests is harmful to human health, but little is known about these wildland fires that also burn houses, cars and basically everything in their path,” said Anthony Wexler, director of the UC Davis Air Quality Research Center. “Researchers at UC Davis are studying communities near these wildfires that were exposed to these emissions and are building laboratory simulators to better understand their toxicity.”

In the engineering courtyard at UC Davis, outside Barbato’s lab, graduate student Nitin Kumar and undergraduates Julie Nguyen and Thomas Tonthat are placing an earth block beside a block of wood.

Kumar takes a blowtorch and blasts 3,400 degrees F of fire to the blocks at the same time, well over the temperature of most wildfires. Within seconds, the wood block chars and is set aflame. Meanwhile, the earth block appears unaffected except for some nearly imperceptible coloring.

The lab team has tested earth blocks in a furnace at nearly 2,200 degrees F. At that point, Barbato says, the earth block reacts much as it would in a kiln, becoming more like red brick.

In addition to thermal limits, the group is conducting flexure and compression tests to measure at what point earth blocks crack under pressure, as well as quantifying their mechanical properties and determining the right “recipe” for their durability. 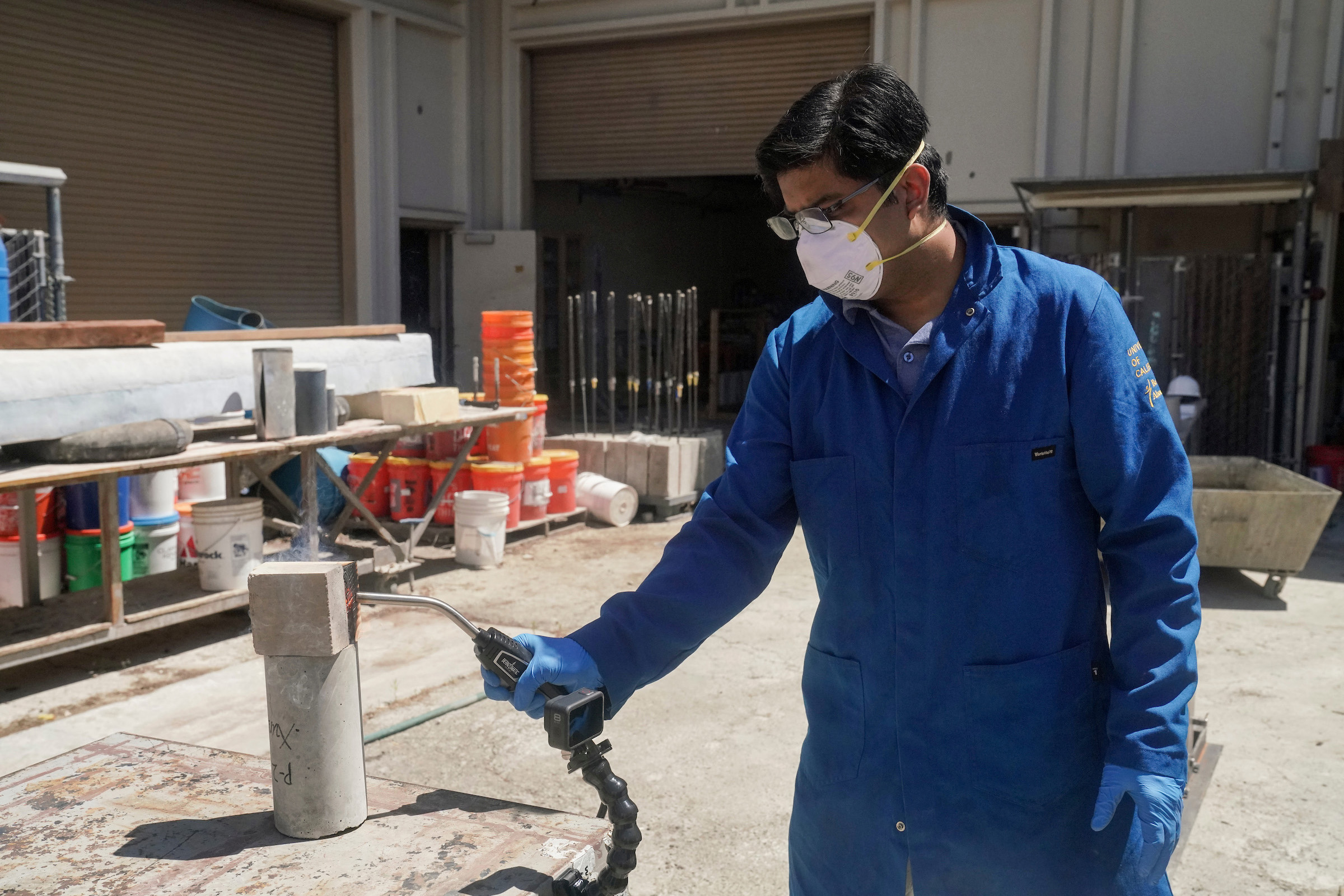 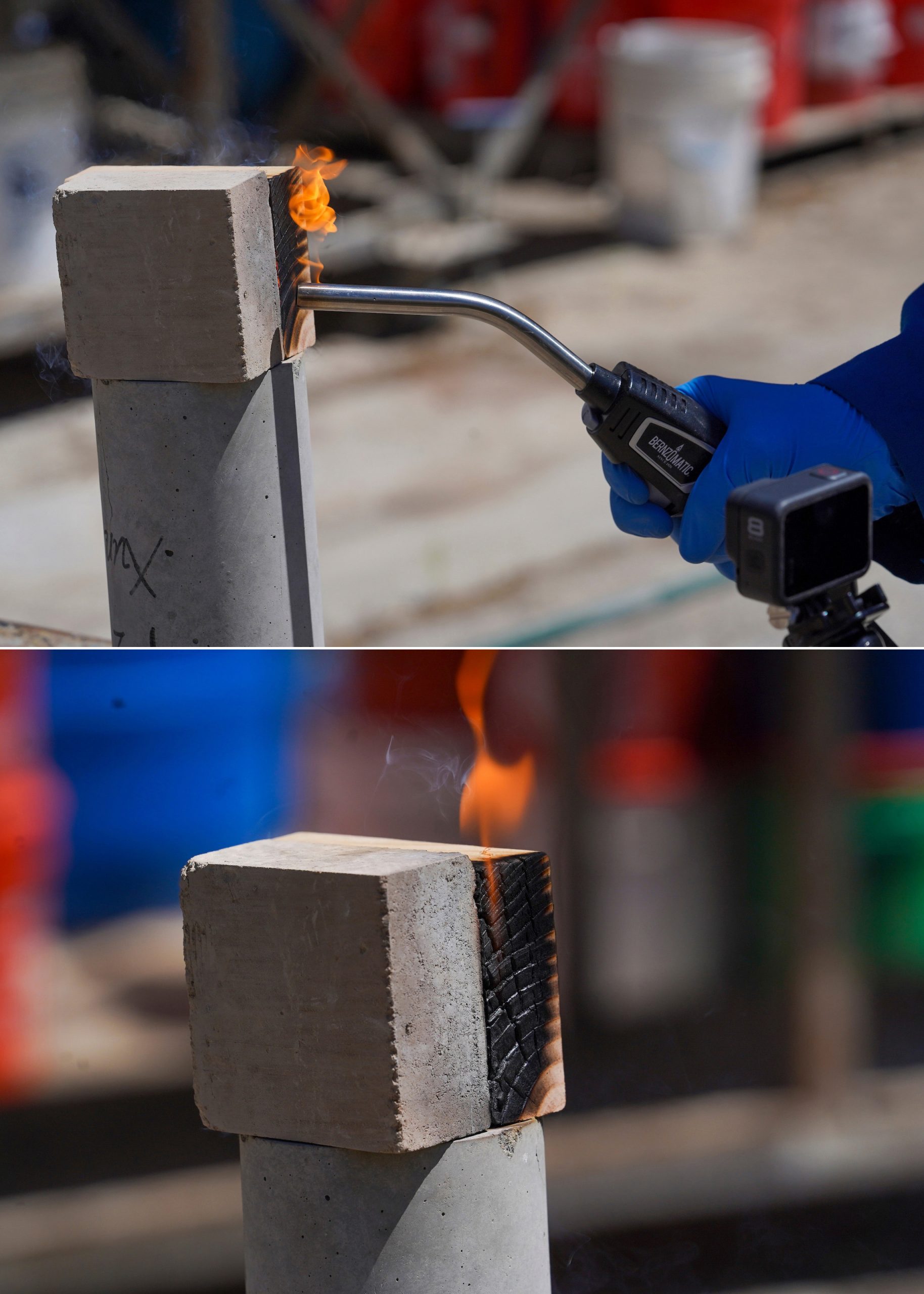 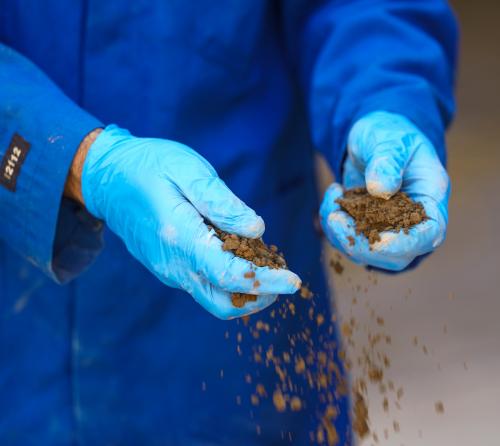 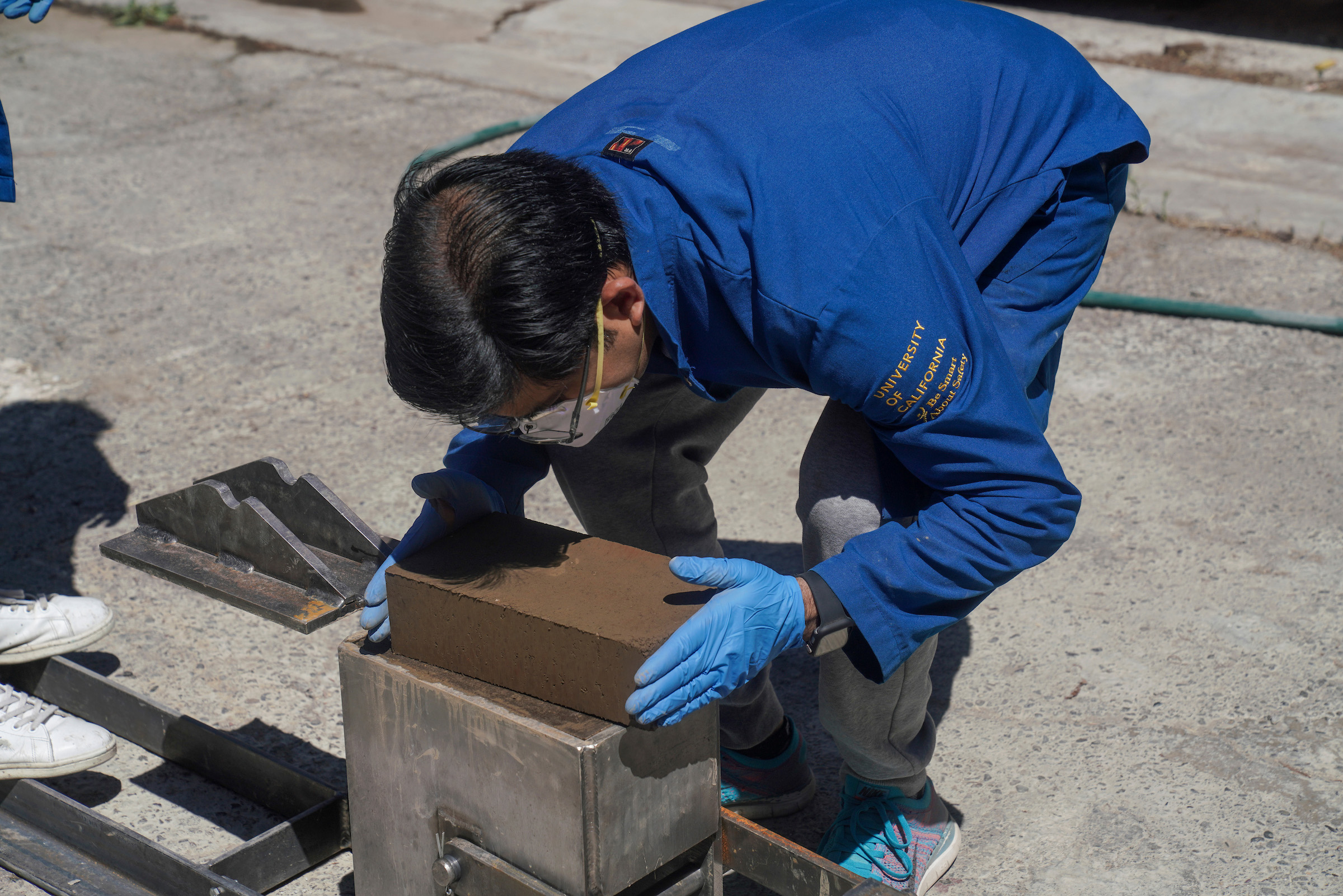 But this is not just about fire.

More than half the nations’ homes are in risky places. A study this month in the journal Earth’s Future from the University of Colorado, Boulder, found that 57 percent of structures in the U.S. are exposed to potentially devastating natural hazards, including wildfire, floods and tornadoes.

“The houses in riskier places for wildfires are often there because they are the least expensive,” Barbato said. “So we are talking about populations that are usually underserved, underrepresented, low-income. They cannot just relocate. They cannot just say, ‘OK, I’m going to live in San Francisco.’ That is not really a solution.”

“If we’re building back better, we need to design not for wind loads or fire loads that are here now but for the ones we think our structures will have to survive in the future.”
— Michele Barbato, structural engineering professor

On top of that, many structures aren’t designed to meet the realities of climate change. Barbato recently co-authored a study on wind loads, which modeled different climate change scenarios from the UN’s International Panel on Climate Change. It found that current U.S. design wind speeds are underestimating projected speeds by 15-30 percent.

“That means a lot of what we’re building now will fail in the future,” Barbato said. “If we’re building back better, we need to design not for wind loads or fire loads that are here now but for the ones we think our structures will have to survive in the future.”

All of that points to an opportunity to address the interconnected challenges of climate change, wildfire and affordable housing.

Barbato is excited about the potential for earth blocks to touch each of those areas: They can be made by the hundreds using soil at the construction site, leaving little need to transport materials. Well insulated and energy-efficient, earth blocks act as a breathing wall, keeping heating, cooling and humidity levels at optimal ranges. Termites leave them alone. They don’t burn. And what isn’t destroyed by earthquake, wind or fire doesn’t become waste, pollution or a problem for insurers.

Affordability is the trickier piece. Currently, earth blocks are more likely to be found as a niche material at an eco-friendly mansion than in an average neighborhood. Barbato and team have constructed earth blocks that are safe and cost-competitive with wood, keenly aware that widespread adoption hinges on economics as much as on structural integrity.

But the market is full of complexities that can slow broader adoption. Earth blocks don’t enjoy the same level of lobbying and public support as do materials like concrete, steel and wood. Poorly designed versions of similar earthen material construction left the public with a bad perception of them. More engineering knowledge is also needed, which are gaps Barbato’s team is helping to fill. They do it with a sense of urgency, given present and looming climate  and population changes.

“We are going to need about 2 billion new homes in the next 80 years,” Barbato said. “If we build the way we do now, there’s not a lot that can be done in terms of climate change; it’s just not sustainable.”

Can we build our way out?

Building fireproof or fire-resilient homes won’t solve all of our wildfire problems, Barbato notes. We need to adjust how we manage forests and vegetation, our land-use policies and infrastructure. But fire-resilient housing can help ease issues ranging from insurance to air quality and save resources, properties, and lives.

“Human society has been able to adapt to big problems before in a very short time,” Barbato said. “Look what happened with COVID-19. Everyone stayed inside, and now we have vaccines and will hopefully go back to something that looks like normal.

“I don’t think it’s a problem of creating new technology,” he continued. “It’s just, do we want to do it? Because it will take some adjustment. If everyone continues what they are doing, we’ll continue to get big climate changes, and we’ll pay the price many times over.”