The Building Itself is now the Solar Panel.

When you walk through the sun-filled atrium of the Edmonton Convention Centre or glimpse the dramatic sloped roof of the Varennes Library in suburban Montreal, it’s not obvious these buildings are generating power. After all, neither has traditional solar panels tacked on the roof.

But the semi-transparent skylights of the atrium and the shingles on the sloped roof are more than just protection from the elements — they’re building-integrated photovoltaics (BIPV). That is, they’re made of solar panels.

It’s a solution touted by Elon Musk, CEO of Tesla, which started selling solar roof tiles in the U.S. in 2017. Since then, a range of made-in-Canada options for different parts of buildings have hit the market — and installations have sprung up across the country showcasing what’s possible. 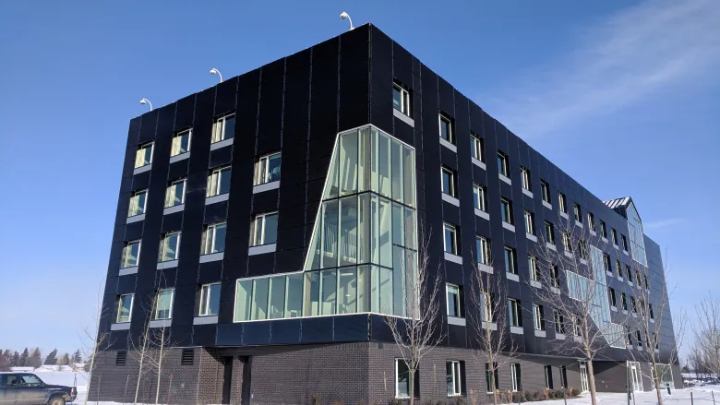 Here’s a closer look at how BIPV differs from traditional solar panels and why a lot more may be part of the buildings of the future.

What are building-integrated photovoltaics?
While traditional solar panels are attached to buildings, BIPVs are built into the exterior as key elements.

They can be anything exposed to the sun: shingles, windows, cladding, skylights, pergolas, balcony railings. One company, Toronto-based Mitrex, is even planning to use them to build greenhouses and highway noise barriers.

BIPV systems are like other solar panels in that they generate clean energy that can be used for backup power or sold to the grid. But they need to be designed differently in order to serve other functions, such as keeping out the wind and rain or letting natural light shine in.

Because of that, BIPV panels come in a much wider variety of shapes, sizes, colours and transparencies.

Why might you use BIPV instead of installing traditional solar panels?
They increase the space or area available to generate solar power.

Finding the space to install traditional solar panels can be challenging in places like cities. Meanwhile, “There is so much unused glass surface on downtown skyscrapers and building walls and windows,” said Adam Yereniuk, director of operations for Kuby Renewable Energy, the company behind the BIPV installation in the Edmonton Convention Centre, Canada’s largest, with a capacity of 169 kW.

The company also worked on a five-storey residence at Red Deer College that’s covered with solar glass cladding on three sides — 545 panels in all.