Texas is known for cheap and plentiful energy resources, but they’re usually of the dirty, fossil fuelbased variety. That reputation is changing. Texans can now buy renewable energy packages that are as cheap as or cheaper than the coal- or natural gasbased alternatives.

Texas is not an anomaly. A study released Friday by the venture capitalist firm DBL Investors shows that states boasting robust green energy programs have the nation’s cheapest electricity. The trend lines suggest it’s only going to get better for their consumers. In 2001, electricity cost more in the 10 top renewable energy states than it did in the 10 states with the lowest proportion of green energy production. By 2013, the situation had turned upside down: States with the most green energy now offer cheap electricity, while the dirty power states are the most expensive.

You could probably figure out whether you’re in a top 10 or bottom 10 renewable energy state by tracking your utilities payments over the past few years. Just in case you don’t archive your electricity bills, the 10 states with cheap green energy are Maine, Iowa, South Dakota, California, Idaho, Kansas, Minnesota, North Dakota, and Oklahoma, plus Washington, D.C. (Hawaii also has a high proportion of renewable energy, but it was excluded because its remoteness dictates energy prices more than any other factor.) The 10 laggard states in the DBL study were Florida, Connecticut, Delaware, South Carolina, West Virginia, Rhode Island, Ohio, Missouri, Tennessee, and Kentucky.

What happened? Technology. The sun and the wind are free. (It sounds like something from a Joni Mitchell song, but it’s true.) The price of renewables is therefore based almost entirely on the cost and efficiency of the hardware that captures the energy. That’s a good thing, because, over the past few decades, engineers have demonstrated an incredible knack for making technology smarter, faster, and cheaper. (See, for instance, Moore’s Law.) The cost of fossil fuelbased electricity, in contrast, depends overwhelmingly on commodity prices. There’s only so much that engineers, economists, and logistics experts can do to manage the swings in coal and natural gas prices.

This is a big advantage for renewables. The cost of wind power has dropped 58 percent in the past five years. Take a look below at what has happened to the cost of solar cells and modules over the past decade. It’s not a precipitous drop, but there is an obvious downward trend. 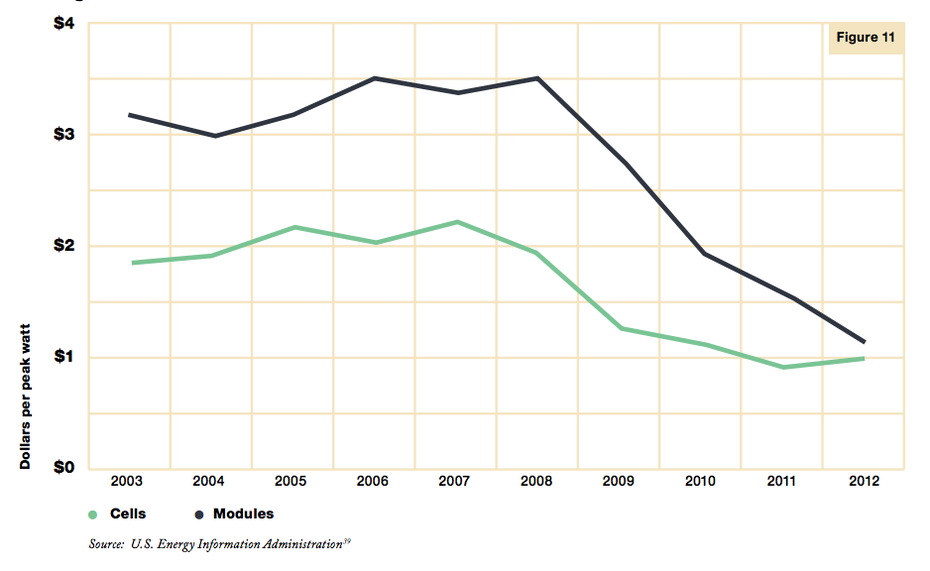 Compare that to the wild swings in the cost of natural gas below. There’s no discernible pattern. The price can increase by a factor of six over the course of five years, then decrease by the same amount in four years.

Imagine you’re an accountant at a utility company and have to do some projects for the next few years. Which of these graphs do you want to deal with?

This isn’t just a feel-good study about the success of renewables; it’s a direct challenge to the dishonest lobbying of fossil fuel interests. The American Legislative Exchange Councilthe secretive coalition of corporative executives who want to write their own state lawsis currently trying to dismantle renewable portfolio standards, the rules that require utilities to generate a proportion of their energy from green sources. This Koch Industriesfunded think tank” claims that green energy mandates replace the free market with bureaucratic government oversight, driving up costs.”

I wanted to start this paragraph with The Koch machine has never been so wrong,” but that’s not accurate. Koch mouthpieces are wrong about so many other things, often spectacularly so. But this is a fairly clear lie. The DBL study is correlationalit doesn’t prove that green energy caused prices to drop; it merely shows that green energy states tend to have lower prices. Nevertheless, the accumulating data makes it very difficult to substantiate the claim that renewable portfolio standards increase electricity costs. Including a high proportion of renewable energy in a utility’s mix of sources does not increase prices.

The Koch machine won’t stop saying so, of course. They tend not to worry about things like studies” and research.” But you should.