Elon Musk recently talked about a new product that might be coming out of SolarCity’s Buffalo factory soon:

It’s a solar roof as opposed to a module on a roof. I think, this is really a fundamental part of achieving a differentiated product strategy is not a beautiful roof that it is a solar roof, it’s not a thing on a roof, it is the roof. That’s quite a difficult engineering challenge, and not something that is available really anywhere else that is at all good. I think this will be something that’s quite a standout. So one of the things I’m really very excited about the future. 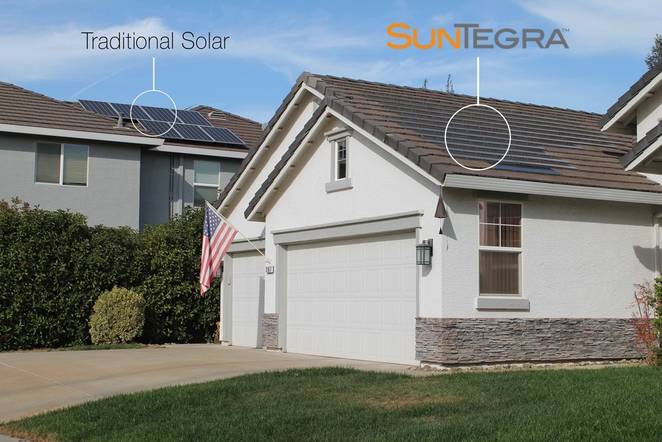 It is a difficult challenge, but the solar roof exists now, and notwithstanding Musk’s claim, it looks pretty good. It’s from SunTegra, and comes in two varieties: one that integrates with asphalt roof shingles, and one with tile roofs. SunTegra systems allow for direct-to-roof installation with no racking, offering customers a more aesthetically-pleasing, high performance solar option that protects your home, produces clean energy, and provides roof and energy bill savings.

Asphalt shingles are the cheapest building material around, and have a relatively short lifespan. Does it make sense to integrate them with expensive solar panels?

But after talking with Oliver Koehler, CEO of Integrated Solar Technology, the maker ofthe Suntegra roof, I was convinced that in fact it is a better roof than asphalt, and a better solar shingle than Dow’s was. 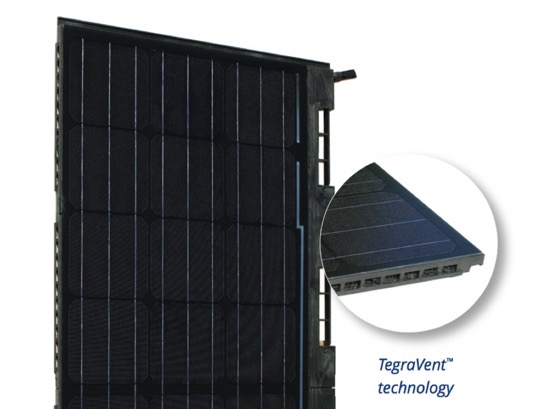 -It’s larger than a conventional shingle, at roughly 52″x23″. That means a lot fewer connections to break down.

-It has a built-in ventilation system, channels behind the solar cells, that will keep them cooler (better for efficiency and longevity) but also keep the whole roof cooler than conventional shingles might.

-Squirrels. Where I live, I recently saw a solar installation that had to be lifted up and the roof replaced because squirrels moved in and chewed up the roof underneath. This can get expensive.

The SunTegra system is more expensive than the standard rack installation (about 15%) but you do save a bit on the roof, so supposedly if you need a new roof or it is a new house, the cost is competitive. It conforms to standard roofing practices and none have leaked yet. 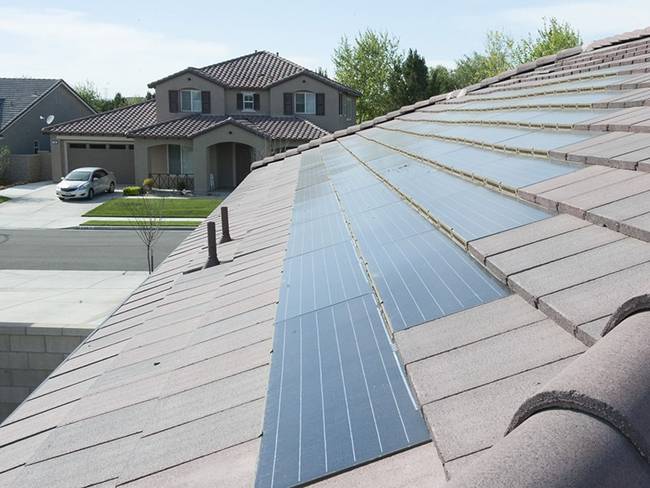 SunTegra also makes a version to replace tile roofs, as in the USA the market has settled on a relatively standard 12″x17″ tile. We have shown many solar tiles over the years, (see related links below) mostly from Europe, and mostly no longer made because there is such variety of sizes and styles there. Perhaps in the USA it will be different.

It is a quandary. We have always promoted the idea of open building- different components age at different rates, and one should design so that they can be separated and replaced at different times. Do we really want to integrate asphalt shingles and solar panels? Aren’t they best kept separate?

On the other hand, we love the idea of every surface of a building becoming a solar power generator. And this is a better roof that is not going to be curling up in ten years, that actually ventilates as well as generates. The way it is installed and flashed, you can replace the shingles around it. It kind of is separate; it’s a different roof.

Pitching his own still vapourware product, Elon Musk notes that â€œthere are 5 million new roofs a year just in the U.S. And so, why not have a solar roof that’s better in many others ways as well. He has a point, and you don’t have to wait for it. SunTegra’s version looks pretty interesting and is available now. More info at SunTegra Tech details: