Solar PV Will Be Cheapest Form Of Power Within A Decade

Solar at 2c/kWh the cheapest source of electricity.

Major new study says policy makers and energy planners still underestimating cost potential of large scale solar. It says that within in a decade, it will be cheapest form of power and will fall to 2c/kWh. 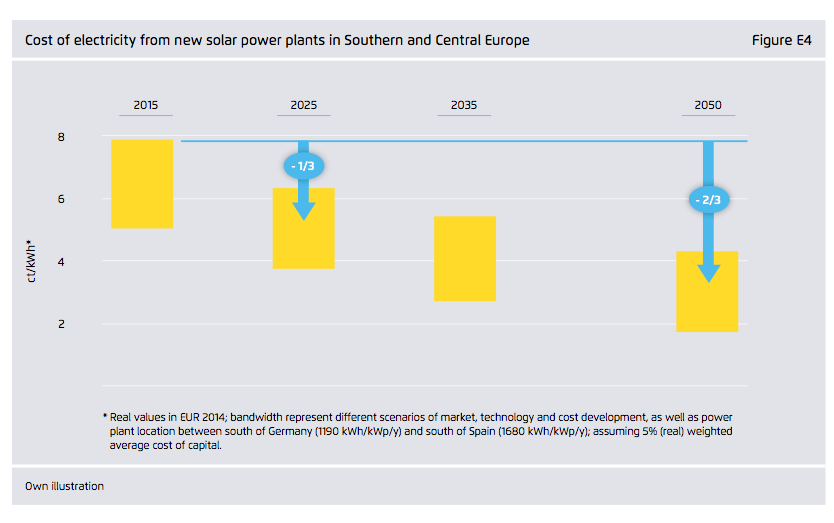 A major new study from a leading German think tank and renewable energy specialist says the cost reduction potential of large scale solar is still misunderstood, and predicts that solar PV will be the cheapest form of power within a decade, and cost less than $US0.02/kWh by 2050.

The study by the Berlin-based Agora Energiewende says that the end to cost reductions from solar plants is not in sight”, even after falling more than 80 per cent in recent years.

It cites a range or reasons for this. Primarily, though, it comes down to an expected doubling in module efficiency, which will mean less panels are needed to produce the same amount of power, and therefore less land, less materials, less maintenance and lower installation costs.

These balance of systems costs are expected to fall by up to 2/3 in coming decades, and combined with a fall in the cost of finance, could cut the cost of solar technology in areas such as Australia, the US and parts of Europe to as low as 1.5 Euro cents/kWh.

Even in the most conservative scenarios for market development, without considering technology breakthroughs, significant further cost reductions are expected,” the report says.

The forecasts produce a range of outcomes, depending on the actual increase in module efficiency to 24, 30, or 35 per cent; the scale of deployment in coming decades, and the extent of learning rates”.

Finally, depending on annual sunshine, power costs of Euro 4-6 c/kWh are expected in Europe by 2025, reaching Euro 2-4 c/kWh by 2050. That means it will be cheaper than conventional technologies which costs between Euro 5c and 10c/kWh by 2025.

It will even cheaper at Euro 1.5c/kWh in countries with more sun.

Lead author Daniel Fuerstenwerth said one of the reasons for the study was the lack of recognition among policy makers and advisors about future cost falls in solar PV, and official forecasts which continued to downplay the potential role of the technology.

This is despite the fact that organisations such as the International Energy Agency has predicted that solar costs would fall to 4c/kWh, and would in effect become unstoppable”, and predicts it will be biggest single source of energy by 2050. Even Australia’s Bureau of Resource and Energy Economics recognises that solar will be the cheapest technology by 2030.

The long term scenarios tend to underestimate the role of solar in power systems and in decarbonisation efforts,” Fuerstenwerth told RenewEconomy in a phone interview.

When you look at the scenarios being prepared there is always a very small share of solar. For example, in Germany, the power grid system is being discussed for scenarios that include a maximum 10 per cent share of solar PV in long term future.”

The Agora study found that in large parts” of Europe, large scale solar was likely to be competing with conventional technologies which costs between Euro 5c and 10c/kWh by 2025. 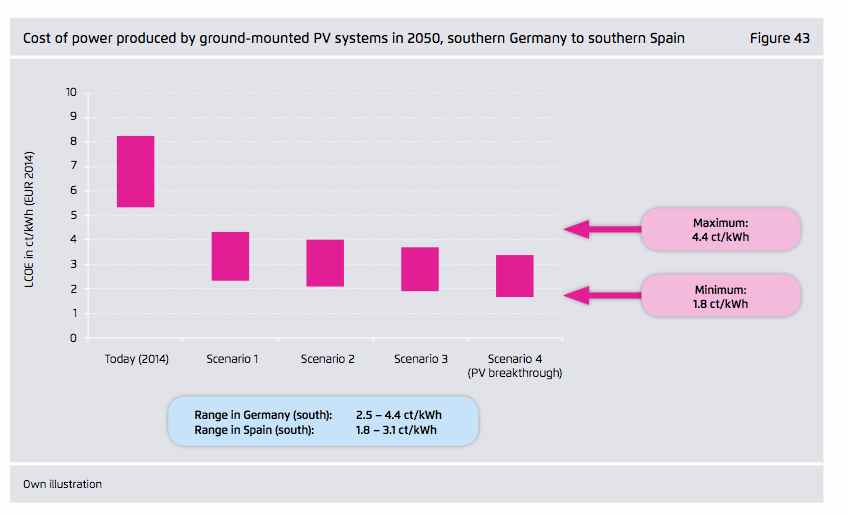 In other regions of the world with higher solar irradiation, solar power will be even cheaper than in Europe.

Our results indicate that solar power will become the cheapest source of electricity in many regions of the world, reaching costs of between Euro 1.6 and 3.7c/kWh in India and the Mena region (Middle East and North Africa) by 2050.

Cost competitive- ness with large- scale conventional power plants will be reached in these regions already within the next decade, at a cost for solar power by 2025 ranging between 3.3 and 5.4 ct/kWh.

(Indeed, in UAE for instance, solar is already cost competitive, with a tender for 200MW of solar going at less than $US0.06/kWh, less than the prevailing cost of gas-fired generation at $US0.09/kwh.

In North America, the study predicts that costs for large scale solar photovoltaics will reach Euro 3.2 to 8.3c/kWh in 2025 and Euro 1.5 to 5.8 c/kWh in 2050, the wide cost range due to significant geographical differences within the region.

In Australia, the study says, costs will reach Euro 3.4 to 7.1c/kWh in 2025 and 1.6 to 4.9 c/kWh in 2050. Interestingly, the study underlines how the cost of capital will be critical to the cost of electricity delivered by solar. This graph below illustrates how (remember the currency is in Euro).

The cost of capital is and will remain a major driver for the cost of power from solar photovoltaics,” the report says. Producing power from solar photovoltaics requires a high up-front investment, but subsequently allows power production for 25 years and more at a marginal cost of close to zero. It is thus a very capital-intensive power-generation technology, and the interest paid on both debt and equity has a large effect on the total cost of a large-scale photovoltaic project.”

It estimates the difference of the cost of technology could be as much as 50 per cent. The regulatory environment will thus be key for reducing the cost of power from solar photovoltaics in the future, as the cost of capital is largely driven by the risk perceived by investors,” it notes. Australian developers understand this very well.

Here is the estimates on all regions: 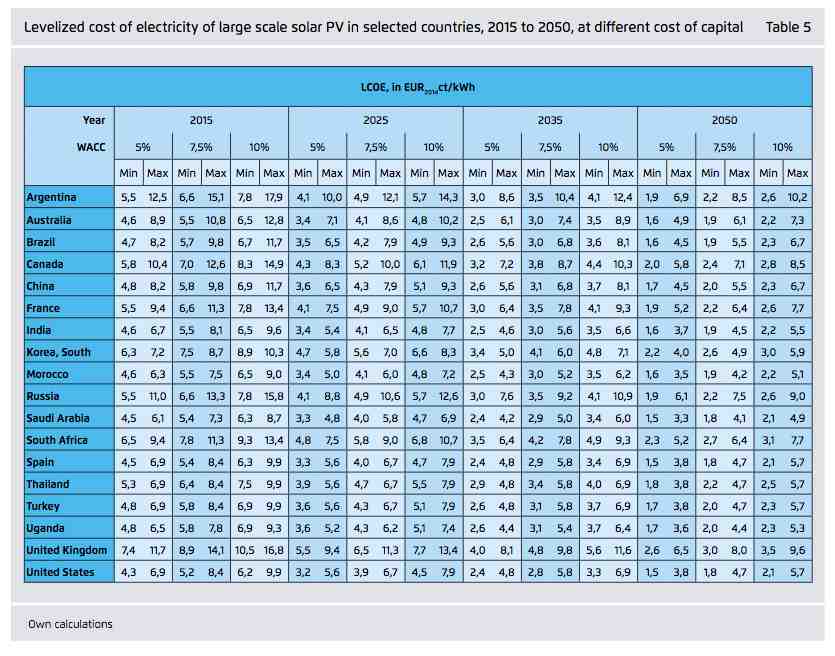