State regulators updated California’s building code to require new homes and commercial buildings to have solar panels and batteries and the wiring needed to switch from heaters that burn natural gas to heat pumps that run on electricity. 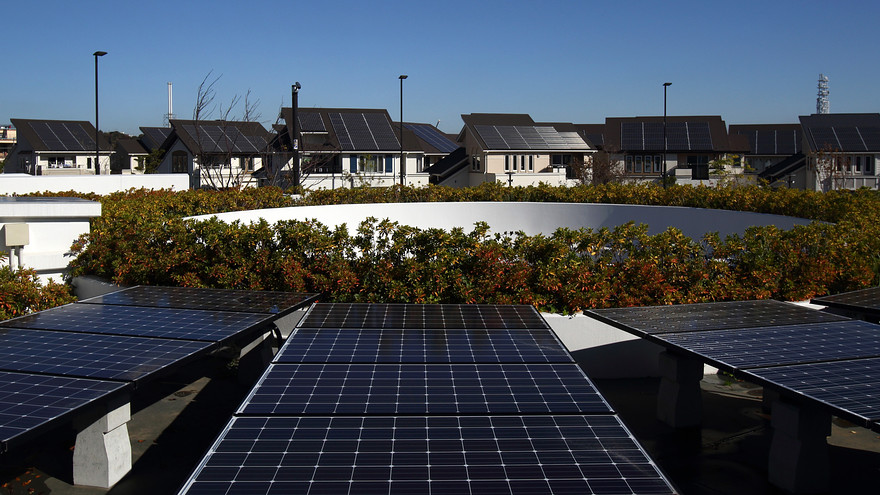 California has led the nation in fighting climate change by encouraging the use of renewable energy and electric cars. Now the state is taking on an even harder challenge — reducing emissions from homes, businesses and other buildings that have to be heated, cooled and powered.

This month, state regulators updated California’s building code to require new homes and commercial buildings to have solar panels and batteries and the wiring needed to switch from heaters that burn natural gas to heat pumps that run on electricity. Energy experts say it is one of the most sweeping single environmental updates to building codes ever attempted by a government agency.

But some energy and building experts warn that California may be taking on too much, too quickly and focusing on the wrong target — new buildings, rather than the much larger universe of existing structures. Their biggest fear is that these new requirements will drive up the state’s already high construction costs, putting new homes out of reach of middle- and lower-income families that cannot as easily afford the higher upfront costs of cleaner energy and heating equipment, which typically pays for itself over years through savings on monthly utility bills.

The median single-family home in California sells for more than $800,000 compared to about $360,000 nationwide, and businesses pay more for rent in cities like San Francisco and San Jose than anywhere else in the country. A big reason costs are higher in California is that the state is not building enough homes, something lawmakers tried to address this past week by advancing legislation that would allow more than one home on each parcel of land.

Adding solar panels and a battery to a new home can raise its cost by $20,000 or more. While that might not matter to somebody buying a million-dollar property, it could be a burden on a family borrowing a few hundred thousand dollars to buy a home.

“You’re going to see the impact in office rents. You’re going to see it in the cost of the milk in your grocery store,” said Donald J. Ruthroff, a principal at Dahlin Group Architecture Planning in Pleasanton, California. “There’s no question this is going to impact prices across the board.”

The idea at the heart of California’s new building code, which is expected to go into effect in 2023, is to reduce and eventually eliminate the use of fossil fuels like natural gas, replacing them with electricity generated by renewable sources like solar panels, wind turbines and hydroelectric dams. It is difficult to make that switch because millions of homes and commercial buildings need to be updated. That’s why California is starting with the easiest buildings to change — ones that haven’t been built yet.

Regulators in California acknowledge their building code changes could raise construction costs but argue that the modifications will save money over time. Officials argue that the changes are essential to reducing planet-warming emissions that pose their own costs. Destruction from wildfires, heat waves and other extreme weather linked to climate change collectively add up to billions of dollars in expenses like firefighting, rebuilding homes and higher electricity bills.

“The urgency of climate change has gone up,” said Andrew McAllister, a member of the California Energy Commission, which developed and approved the building code changes. “We know we’ve got to get on the stick and do something.”

President Joe Biden has also made fighting climate change a priority. The administration this month said the United States needs to triple or quadruple the annual pace at which it is adding solar energy in order to eliminate emissions from the electricity sector by 2035. That would increase solar generation from about 3% of the power sector to 40%.

California is already far along in that transition with more than one-third of its electricity coming from renewable sources. Its building code change is meant to accelerate that.

California and Washington state develop their own energy standards for building codes. The other 48 states and the District of Columbia largely use models developed by a division of the International Code Council, a nonprofit organization run by building officials from across the country. Some states leave buildings code decisions to local governments. The code council sometimes adopts energy-related standards developed by California, a representative of the group said.

Michael Marini, who co-owns a company that builds homes in Southern California, said he generally supports making buildings greener but he fears that the state is not thinking through the consequences of the changes it is pushing through.

Marini’s company, Planet Home Living, is adding rooftop solar panels in his latest projects, including town house-style and single-family homes in Los Angeles, as required by a previous change to the state’s building code that took effect last year. Those homes start at close to $1 million and go as high as $2 million. Buyers of those properties will not flinch at having to pay an extra $10,000 to $15,000 for solar panels, he said. Marini is also not worried about the new code change that will require him to add a home battery at a cost of about $5,000 starting in 2023.

But in other locations like San Bernardino, a far less affluent city east of Los Angeles, where the typical home sells for about $529,000, the cost of solar panels and batteries can be a bigger burden to homebuyers.

“If we push it and we do things that are modern and efficient and green, we tend to be able to do it in Los Angeles,” Marini said. “That’s not entirely true in the rest of the country. We can’t do that in San Bernardino. At the end, the consumer absorbs the cost.”

The Sycamore Square town houses were the last ones developed in San Bernardino before the solar mandate took effect last year. Glenn Elssmann, a partner in the project who hired Marini’s company as the contractor, said the added cost of the solar requirement would have made construction of the development impossible. Homes in Sycamore Square started at $340,000 for the four-bedroom, three-bath units and reached as high as $370,000.

Jimmie Joyce, 44, who works in payroll at the Los Angeles County Department of Public Health, will soon close on the purchase of a house in Sycamore Square after trying for almost a year to buy closer to Inglewood, a city near the Los Angeles International Airport where he lives now. His commute will likely increase from about 40 minutes to 1 1/2 hours.

His new home is already expensive for him, he said, and adding $10,000 to $20,000 more for solar, a battery and other amenities “would make that much more challenging.”

The changes regulators adopted this month will also require most new commercial buildings, including schools, hotels, hospitals, office buildings, retailers and grocery stores, and apartment buildings and condos above three stories to include solar and batteries. And regulators will require single-family homes to have wiring that will allow them to use electric heat pumps and water heaters, rather than ones that burn natural gas. About 55% of California’s homes use electric heat and 45% use natural gas.

Chris Ochoa, senior counsel for codes and regulatory and legislative affairs at the California Building Industry Association, said the builders support efforts to address climate change. But he believes more needs to be done to retrofit existing buildings with more energy-efficient systems, too. Otherwise, new homes, with more efficient and advanced systems, will become even less affordable to first-time buyers.

There are 14 million existing homes, a number that dwarfs the roughly 100,000 permits that builders seek annually for new homes in the state, Ochoa added.

“You’ve really got to focus on the existing housing stock,” he said. “That’s where you’re getting the biggest bang for your buck.”

Ruthroff, the architect, said the state’s approach to focus on new homes made sense because it is “the low-hanging fruit.” But he added that there was only so much to be gained from imposing such requirements on new buildings since they are already much better insulated and have more advanced appliances and heating and cooling equipment than older homes.

McAllister, the energy commission member, said he appreciates the need to upgrade existing buildings. But tackling that problem will take many years and a lot of money. “It’s going to take tens of billions of dollars to get into our existing homes,” he said.

For now, the commission is focused on requiring the most cost-effective changes. For example, its recent code change was based on analysis that determined that it made economic sense to require solar panels and batteries for new homes and most commercial buildings, but not for much larger warehouses and factories. The new code changes will also go down easier, McAllister said, because many homeowners and businesses are already buying solar panels and batteries.

“Solar is cheap,” McAllister said. And “it’s an amenity that the marketplace actually wants.”

Pangea Builders is an educational and research organization providing sustainable buildings for residential, commercial and government use. We are specialists in Modern Off-Grid Designs, Systems and Construction.