Lumber is getting VERY expensive

Lumber mania is sweeping North America.
A lumber frenzy has taken over homebuilding, Home Depot, and the internet.

For some people, the journey into America’s lumber crunch starts with the decision to build a new home, or at Home Depot, where the pandemic-driven home renovation craze has contributed to making basic materials pricey and hard to come by. For others, it starts with the memes. The price of lumber has soared over the past year, and it’s an incredibly hot commodity. The internet has taken notice.

“Not even one police escort,” on person on Twitter quipped alongside a photo of a truck stacked with lumber rolling down the highway. Another snapped a picture of a pile of boards in a building, remarking, “Wow, neighbors just casually flaunting their wealth in the hallway.”

While the memes are a joke, the situation is real: Demand for lumber has exploded in recent months, and suppliers have struggled to keep up. Much of the industry has been on its heels since the Great Recession, and it slowed down production accordingly. Those sawmill closures and such aren’t easy to reverse, even if someone might have predicted things would pick up now.

“Not only has it surprised me, it’s just surprised the whole industry, how quickly we came roaring back. Housing and construction, repair and remodel, that’s where so much money was pointed by American consumers that the sheer scale of demand was hard to fathom,” Stinson Dean, CEO of Deacon Lumber, a lumber trading company based in Missouri, told me.

In the middle of our call, he had to pause to make a sale. “I’m so sorry, everyone needs lumber, and I have it,” he said after putting me on hold. He explained it probably would have been cheaper for his client, in Texas, to buy the truckload of lumber he just sold them directly from a producer up in Canada, but that producer is sold out through May, and they needed the materials ASAP. “You can’t get anything prompt, and a lot of folks have just underestimated their inventory needs, so they need to lean on folks like me.”

The lumber frenzy is part of a string of unexpected and strange developments in the Covid-19 economy. Before there was the great run on wood of 2021, there was the great run on toilet paper of 2020. The same lockdown boredom and extra cash that inspired some people to get into day trading animated people to decide it was time to fix up their homes. Those who fled cities decided not only to buy existing homes but also to build new ones.

In recent days, I spoke with a dozen people across the lumber industry about the economics of the current craze and why lumber is so expensive and so hard to come by. Many were bemused that anyone was even interested. Panels and two-by-fours and studs are not usually the stuff of public intrigue.

“I honestly don’t know what to make of it,” said Chace Barber, a Canadian logger and truck driver who’s become a bit of a lumberjack TikTok star in recent months, of his newfound internet following. “I guess I’ve been trying to explain as much about logging as I can.” It wasn’t a given that the TikTok crowd would be particularly into his line of work, but the memeification of lumber has certainly helped — not to mention that the 32-year-old Barber is quite attractive. (Though he says he doesn’t get as many DMs as you’d think.)

Barber isn’t the only one who’s puzzled — at the cultural interest, and also the broader situation. Beyond a 2018 blip, the lumber industry hasn’t exactly been thriving lately. “Everybody’s hot and heavy about this business we’re in, and to us, it’s kind of funny, because this is a generational run,” said Chip Setzer, director of trading and growth at Mickey, a commodities trading platform. “I would venture to guess there’s nobody alive that has ever seen what we’re going through right now.”

Hate your house in the pandemic? You’re not alone.
Before we get further into the lumber industry crunch, it’s probably a good idea to explain how the flow of material usually goes: Someone cuts down a log in the forest, it gets put in a truck, and goes to a sawmill or panel mill to be processed into a finished product — a stick of lumber, a sheet of plywood or OSB (oriented strand board), etc. That then goes out into the world to be sold.

Timber and lumber refer to different things: Timber is the raw fiber from the forest, the tree; lumber is a manufactured finished good, like what you’d buy at the hardware store to fix your fence. You can sort of think of the chain like the oil industry. The unprocessed oil is the log, the refinery is the sawmill, and gas is the lumber — the product everyone’s talking about now.

To a certain extent, the story of that lumber mania is a pretty straightforward one of supply and demand: People want more wood than there is to go around.

And while there are places where the supply of timber is tight, there are others where it’s not at all. What’s vexing people trying to build a deck isn’t really a shortage of trees to be cut down, it’s more a shortage of the processed wood you can actually use — the lumber.

When the pandemic hit in the spring of 2020, many people in the lumber industry assumed business was about to go sour. Millions of people were out of work, businesses across the country were shuttered, and the country was in a recession. And so, producers reacted accordingly.

“They really dialed back, thinking that demand would fall, and the reality is that demand never slowed,” said Dustin Jalbert, senior economist and lumber industry specialist at Fastmarkets RISI.

Instead, things sped up. People stuck at home because of Covid-19 shutdowns across the country decided it was a good time to take on home improvement projects repairing and remodeling their homes — they put up fences, added on decks, built out offices, refinished basements. The DIY trend helped drive stellar sales numbers at stores such as Home Depot and Lowe’s.

Many of those who weren’t busy fixing up their homes went looking for new ones. And where they couldn’t find preexisting homes, they started to build. Whatever initial slowdown there may have been in construction pretty quickly subsided. “Us being capitalist America, if people want to buy a house because they want to move out of the city and move to the suburbs, someone will build it for them. They’ll figure out a way,” said Michael Wisnefski, CEO of MaterialsXchange, an online marketplace for lumber and plywood.

Residential housing starts — a metric of when new construction projects start — have consistently climbed, hitting rates not seen since before the Great Recession. The hot housing market helped heat up the lumber market, and in turn, that’s made new housing prices higher.

“It’s adding about $36,000 to the price of a typical newly built home and almost $13,000 to a typical apartment,” said Robert Dietz, chief economist at the National Association of Home Builders. 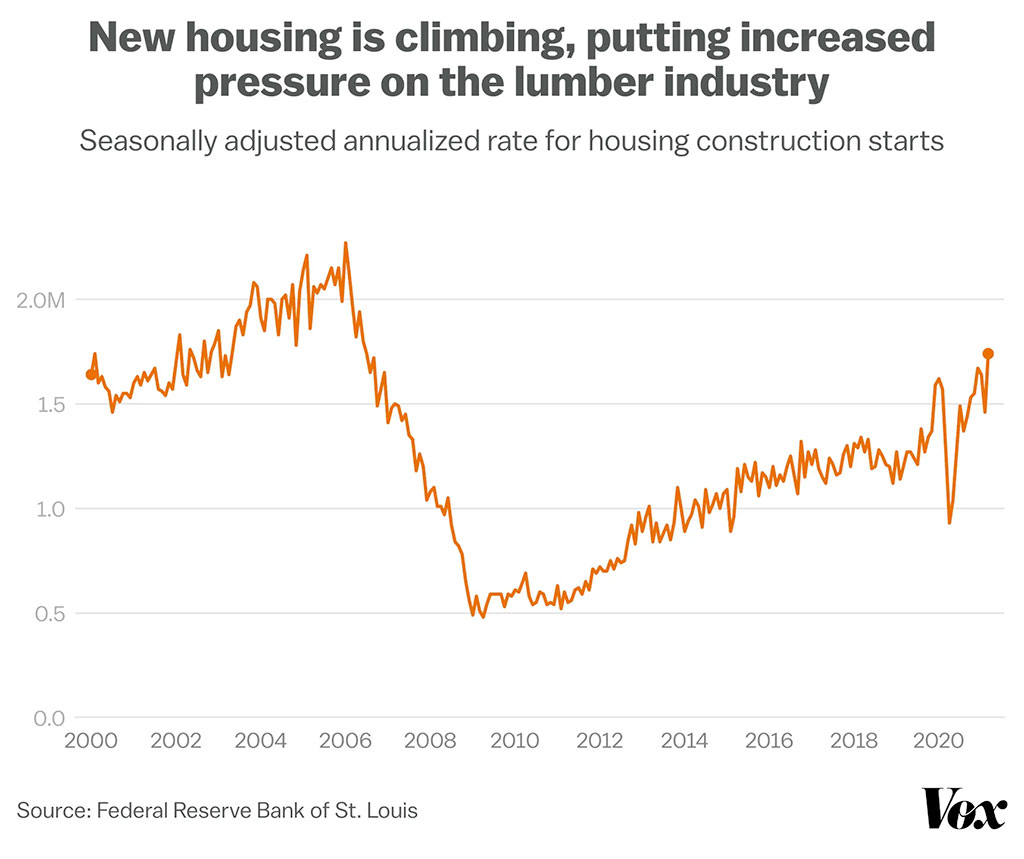 It’s worth noting that demand isn’t just surging in North America; it’s also up overseas, which further strains the industry.

The supply side almost didn’t believe the lumber boom.

The lumber industry has struggled to recover in the wake of the Great Recession and housing bubble, and a series of economic, regulatory, and environmental issues have weighed it down. In the US and Canada, many sawmills closed up shop altogether or otherwise adjusted operations downward; 2019 was a bad year for lumber in particular.

“You can’t have 12 recessionary years in an industry and not have that industry adjust how it behaves,” said Paul Jannke, principal at Forest Economic Advisors.

In the spring of 2020, in preparation for even worse business, a lot of wholesalers sold off inventory and dialed down operations. As it became increasingly clear that the pandemic might not be such a disaster for the sector after all, it took the industry a while to believe it would last. “They didn’t actually start production up right away, and by the time they figured out this was actually real and it was going to last, they ran into issues with quarantining their employees, so they weren’t able to ramp up production,” Jannke said.

Finding lumber workers was challenging pre-Covid-19; during the pandemic, it’s been even harder. Sawmills have had a hard time staffing up and adding shifts, not only because of Covid-related restrictions and safety measures but also because a lot of people don’t want to work those types of jobs. Some people I spoke with suggested expanded unemployment insurance, which adds an extra $300 a week onto state benefits until September 6, may also be a factor — though, of course, sawmills are making so much money now they might be able to afford to pay workers more and court them back.