Just 9.1% of America’s construction workers are women – here’s what it’s like to be one of them

Sinade Caroll was on her way home from nursing school one evening six years ago when she saw an ad on the New York City subway for Nontraditional Employment for Women (NEW), an organization that trains women for careers in construction, utility and maintenance trades.

“I didn’t know that women were construction workers, or that women were actually in these fields where there are mostly men,” the 26-year-old says. “I didn’t experience that growing up and something told me to call the program.”

Caroll had earned her GED in 2011 and was hoping to find work as a medical assistant after nursing school. But she called NEW to learn more, and says she realized immediately that she had found the right career path for her. She quit nursing school and enrolled in the organization’s eight-week apprenticeship program, where she learned everything from how to accurately read a measuring tape to how to lift heavy materials without getting hurt. 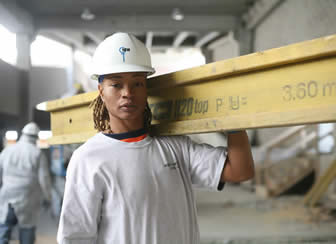 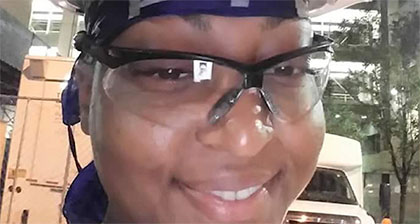 When her apprenticeship was done, Caroll joined the New York City District Council Carpenters Union and found a full-time, paid job as a construction worker within two weeks. At her current job, she says, her role is “putting up the sheetrock and framing hardware ceilings.”

The construction industry is expected to see 12 percent employment growth between 2016 and 2026, according to the Bureau of Labor Statistics, and as the industry continues to face a worker shortage, many state legislators and professional organizations are doing all they can to bring more women like Caroll into an industry packed with diverse opportunities and the potential to earn strong wages.

The average annual salary for construction workers in the U.S. in 2017 was $38,890, according to the Bureau of Labor Statistics (BLS), though pay varies based on experience, job title and location. U.S. News & World Report found that in other construction roles, including structural iron and steel workers and construction managers, average salaries climbed as high as $101,000.

Schillivia Baptiste, who owns the construction firm Laland Baptiste, says that as a kid who loved STEM classes, she had no idea that she could find a career in construction as an engineer. Her introduction to the industry came in high school when she attended a summer program at Manhattan College and learned about the different type of jobs you could get with an engineering degree.

She earned her bachelor’s degree in civil engineering from New York University Tandon School of Engineering (formerly the Brooklyn Collegiate and Polytechnic Institute). In college, Baptiste interned for the New York State Department of Transportation as a transportation construction inspector and at the Port Authority of New York & New Jersey as a traffic engineer. When she graduated, she worked at a private civil engineering firm in Huntington, New York, for 13 years, doing site development work.

In 2008, she struck out on her own and started her own construction management business.

“I think there is not enough introduction at the elementary and middle school grade age of what young girls can be,” says Baptiste, who links the industry’s scant female workforce to a lack of early exposure. “I think it starts there, and before you get to high school you’re choosing a high school that has something you want to study and then by the time you get to college you’re able to make a decision and say, ‘OK, this is what I want to do.'”

Bringing more women into the industry

Professional organizations, vocational training programs and lawmakers all have vital roles to play in bringing more women into industries like construction that have historically been predominantly male.

NEW, the workforce development program that helped Carrol launch her career in construction, was founded 1978 and works primarily with low-income women from the five New York City boroughs. Through partnerships with labor unions, contractors and the government, NEW has helped more than 1,300 graduates find stable employment as electricians, carpenters, plumbers, painters and iron-workers since 2005.

In Massachusetts, the state Gaming Commission has been proactive about the opportunity to build gender diversity on new casino construction projects, passing a legislative mandate for casinos to increase workforce diversity. The mandate requires licensees to put women in 6.9 percent of the construction jobs.

“In order to make this work, you have to have a kicka– champion, and you’ve got to kick these doors down,” Steve Crosby, then-chairman of the commission, told CNBC Make It in August.

“We go union by union, contractor by contractor — ‘Do you have that? Have you met the target?'” he says. “If you are an outlier — somebody else is doing 8 percent women and you’re doing zero percent women — we call you out.”

Even as CEO of a company she founded, Baptiste says she’s had several encounters where she had to prove herself as a leader at work.

“Graduating as one of five females in my class, it was the beginning of a world where some males only see you as an assistant to someone, or the secretary to someone else,” she says. “It’s always interesting going into a meeting where they are like, ‘Who’s Baptiste?’ and I’m like, ‘It’s me.'”

But Baptiste says she never forgets that she’s earned her spot at the table.

“I’ve had opportunities where I’ve had to manage males, and you can sense them being uncomfortable with my authority or sense of knowledge,” she explains. “But my goal stays the same, and that is to train them, share that knowledge and help them be able to function in their position and overall on their team.”

Amanda Gray is a national architectural and commercial account manager for The Dow Chemical Company. She says that as an executive in construction, it’s not uncommon for male colleagues to doubt her credibility.

She recalls a time when she was leading a meeting, the only woman in a group of 14 people at a job site. Gray started talking about the technical details for an upcoming project when a male consultant stopped her and asked, “Ma’am do you even know what the cut section of a building is?”

Gray says she started laughing, because he was challenging her knowledge of one of the most basic aspects of construction. “Everyone around us started laughing as well,” she says. “The good thing is, you know, I had built credibility with these people in the past and someone stepped in and said, ‘I can’t believe you would ask her that question.'”

Though these attitudes about women in construction persist in some corners, Gray, Baptiste and Caroll all say that overall, the industry is becoming more diverse and more welcoming to women. In fact, Caroll says that in her experience in the field, she’s seen a 2:1 male-to-female ratio on some of the construction sites where she’s worked — a significant jump from previous years.

Baptiste says that for women who are interested in entering the field today, there are many organizations that can offer them assistance and mentorship. She notes the support she’s received from the national organization Professional Women in Construction. She says she’s been part of the group for several years, and it’s been an important source of industry contacts and potential clients.

“There are a lot of organizations like Professional Women in Construction that provide mentorship, networking and opportunities for growth and business development to women in the industry,” she says. She advises anyone interested in construction to find a local support group to join. “[These organizations] are not only for you if you’re an owner, but even if you’re just an intern in college, in high school or just starting out in the industry.”

“Women at Work” is a CNBC Make It series in which we explore the experiences of women working in majority-male occupations. Does that describe you? Contact courtney.connley@nbcuni.com to share your story.