SolarCity, the Elon Musk-chaired clean energy company, says it’s about to start mass-manufacturing the world’s most efficient rooftop solar panel.” Naturally, the combination of keyphrases Elon Musk,” World’s Most,” and Solar Panels” have set the internet aflutterand, for once, it’s probably warranted.

According to the company, the new panel generates more power per square foot and harvests more energy over a year than any other rooftop panel in production, and will be the highest volume solar panel manufactured in the Western Hemisphere.” While those panels may or may not be the world’s most efficient”that distinction is more important for drawing headlines, anywayit’s undoubtedly important news that the company plans on rolling out a major domestic solar panel manufacturing effort to produce them. 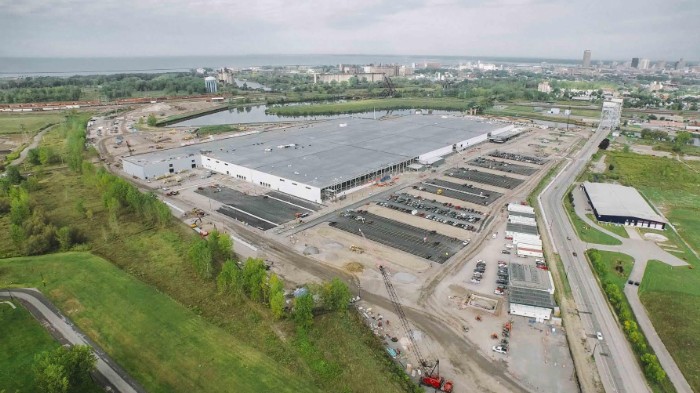 According to SolarCity, a massive, solar manufacturing plant (pictured above) is under construction in Buffalo, New York. But production will begin on the super-efficient panels, which were designed by Silevo, a company acquired by SolarCity, in Fresno, California next month. In an email, co-founder Lydon Rive told me me that by making its own solar panels, the company will bring down system costs by 15 to 20 cents a watt.”

It is indeed a fairly big deal.

“The additional gain in efficiency from an American-based company will help give the US solar industry a global advantage.”

Basically, the higher efficiency will lead to fewer natural resources and less energy required to produce clean electricity,” Pierre Bull, an Energy and Transit policy analyst with the National Resource Defense Council, told me. On the policy and business aspect, the additional gain in efficiency from an American-based company will help give the US solar industry a global advantage.”

Eventually, Rive says, the solar module will have a cost of “mid 50 cents per watt,” which is essential to making sure our cost structure can survive the loss of the ITC. That’s why we’re doing this. We’re expecting a reduction of 10 cents per watt in balance of system and labor as a result of the high efficiency panels.”

And therein lies the crux of the matterthis ultra-efficient newfangled solar tech isn’t just a flashy new product for SolarCity to tout. It may be necessary for the company to survive. The ITC is short for the Investment Tax Credit, and it’s a 30 percent federal tax credit for solar systems on residential and commercial properties. It has been enormously successful in growing the solar industry across the country. But it expires on December 31, 2016.

The industry is certainly aware of the sunset of the ITC,” Bull said, it’s been a good policy, long-term based, provided certainty from the long-term program from the federal side. I think the industry williscertainly trying to hedge its bets and is thinking of the post-ITC regime.”

So, US renewable energy companies are scrambling to prepare for the inevitable hit. Solar is an increasingly bipartisan issue, and many are working feverishly to extend the credit, but in the current political climate, it seems unlikely that this will happen by next year. (And to those who might say ‘good! let solar try to survive without subsidies,’ I would remind that oil, coal, and gas currently enjoy ample subsidies of their own, to the tune of hundreds of billions of dollars a year globally.) If it is extended, calculations from Bloomberg New Energy Finance and the Solar Energy Industry Association show that the credit could add 69 gigawatts of solar capacity by 2020.

But solar companies can’t count on that. Thus, SolarCity and its competitors are looking for ways to ensure they can remain profitable with their already razor-thin margins, without the tax break.

Building a more efficient solar panel and having that manufacturing in-house is certainly one strategic response that SolarCity has done to hedge against the risk of the ITC going away,” Bull said.

Now, the US solar industry will survive, even thrive, even if companies can’t afford the world’s most efficient rooftop panels or domestic manufacturing. That SIEA/BNEF report shows that the industry would likely only take a temporary, two-year hit before resuming growth if the ITC is allowed to expire. And across the nation, solar is reaching grid parity with (read: it’s just as cheap as) natural gas.

Musk’s solar concern is merely, in some ways, leading the charge.