Green buildings will have to go beyond conserving energy

Green buildings will have to go beyond conserving energy

Buildings designed by Norwegian architecture firm Snøhetta often look like the mountain peak for which the company is named. Snøhetta’s designs are simple, stark, and by all accounts breathtaking. 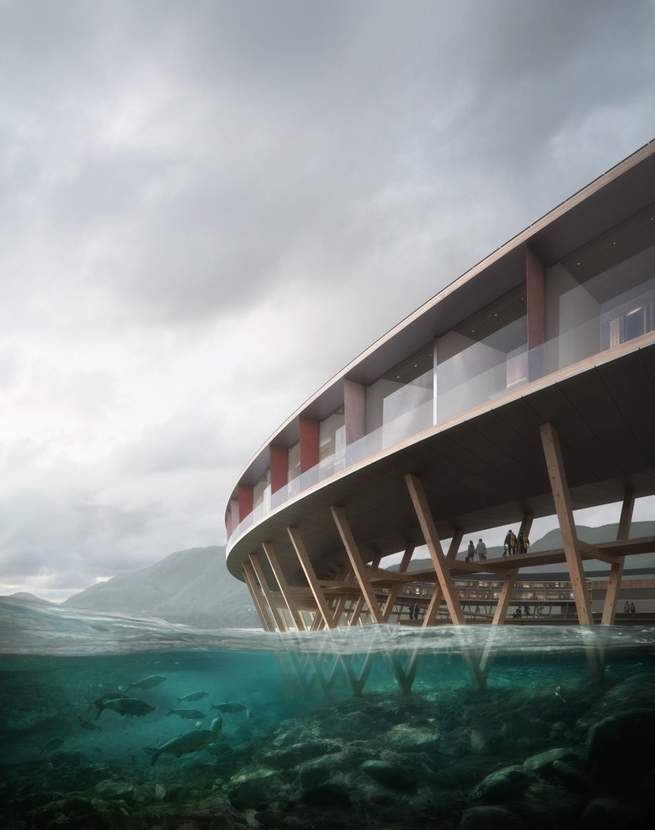 But the company’s latest design, for a glowing ring-shaped hotel near the Arctic village of Glomfjord, Norway, is drawing attention for a slightly different reason. Inspired by the hotel’s climate-changed surroundings, including Norway’s second-largest, but rapidly dwindling, glacier, the owners of the Svart Hotel announced their intention to meet Powerhouse green building standards. If all goes according to plan, this sleek structure will create more energy than it uses.

Rune Stene is the managing director of Powerhouse. Like LEED and other green building standards, Powerhouse is both a business and a set of construction standards. Employees of Powerhouse work with clients to develop energy-positive designs. When construction on a building like the Svart Hotel is finished, Powerhouse employees test the structure’s emissions and, if the building passes, certify it as a Powerhouse building.

Stene says that Norway, like many other European countries, has been on the forefront of environmentally sound designs. But until architects at Snøhetta, the real estate company ENTRA, the development firm SKANSKA, and the environmental engineering firm Asplan Viak teamed up to create the Powerhouse standards, no one was this tough on energy consumption, according to Stene.

At the time—2011—there was no standard for energy positive buildings,” Stene says. “We see climate change as the biggest challenge for humans and the world, so we wanted to focus more on energy than the other aspects” like health or emissions, he says. The thought is that as climate change escalates, demand for Powerhouse consultants will rise, too.

The Powerhouse certification concept is relatively simple. Buildings that earn this designation must “pay back the energy used for the materials, for the construction phase, and also for the 60-year-long operational phase,” Stene says. But that’s no easy feat. The process for creating generic concrete, for example, generates huge C02 emissions, releasing potent greenhouse gas into the atmosphere. While many clean energy options are available, building materials have remained relatively costly, at least in terms of carbon. In 2010, one analysis suggested that a two-bedroom home required almost 180,000 pounds of C02. From the wood to the electricity need to run a powertool, the energy investment on new construction is enormous.

To offset this, Stene says, the hotel will invest in more environmentally-friendly (and perhaps more expensive) materials; shift the direction of the building to maximize sunlight to mitigate electricity usage; and install solar panels and geothermal pumps so the hotel can produce its own energy overtime. These strategies mean that, even with one major renovation a few decades down the line, by 2080 the Svart Hotel will have produced more energy than it cost to create and operate.

While Powerhouse standards focus exclusively on energy usage, Magali Delmas, an expert in corporate sustainability at the Institute of the Environment and Sustainability at the University of California, Los Angeles, says green building can be measured a dozen different ways.

The construction standard with the most name recognition is probably the Leadership in Energy and Environmental Design, or LEED, certification. Established in 1994, LEED is now an international, multi-tier rating system that considers structures and, increasingly, whole neighborhoods in terms of energy efficiency. By installing solar panels or water recyclers, buildings can reduce their energy footprint. Studies show that the buildings are typically 30 percent more efficient than other buildings and have other benefits like reduced air pollution indoors. And at least one study suggests people working in LEED buildings are more productive, according to Delmas. “There is an increase in rent for those that have LEED buildings—about 50 cents per square foot annually,” she says. “People seem to be paying for it.”

In the two decades since LEED was established, other rating systems have arisen, tackling different measures of “green,” or taking different approaches to the same only LEED problems. Passive House, a German building philosophy that has recently made inroads in the United States, aims to construct homes so carefully sealed they require neither artificial heating or cooling. And the Living Building Challenge, for example, deals with materials, energy, and water like LEED, but also sets standards for health, equity and even beauty.

When asked about the future of green building, Delmas seems to have a clear sense of where we’re headed. “The trend is going into wellness and health,” she says. Launched in 2014, the WELL Building Standard is emblematic of this new direction. Though it has many environmental components, its primary focus is on the way the built environment impacts human health, with an emphasis on water and air quality, but also light, fitness, comfort, and “mind.” (The certification process even involves a medical review.)

Ultimately, Powerhouse will probably find plenty of customers. Consumers, as Delmas notes, are willing to pay both for a better quality of life and the knowledge they’re helping the environment—or at least not actively hurting it. Competition in the green building certification world is stiff, but we all stand to benefit as more and more new construction goes up with sustainability in mind.