Couple Retired Off-Grid in their 30s

Steve Adcock wakes up at 6 a.m. every day. He starts his morning with a workout in his home gym before settling down at his desk to check emails and browse social media. By 10, when most of America’s other 39-year-olds have logged on for work, he’s getting ready to take his dog for a walk around his desert property in Pearce, Arizona. It’s a tried and true routine for Adcock, who has been retired for the past five years.

Adcock didn’t always have such a relaxed life though. He spent 14 years working in information technology, a career that “pays well, but tends to drain the life out of you,” he tells CNBC Make It. After more than a decade of work, he realized it was time for a switch.

“In my early 30s, I came to the realization that I just could not spend the rest of my life sitting in front of a computer, working 10 to 12 hours a day, writing computer code or fixing problems,” he says. “I just couldn’t do that.”

He approached his wife Courtney, now 36, with the idea to retire early. Though she was less sure about retiring than Steve, thanks in part to her fondness for her job as an engineer, she eventually came around to it. The couple formed a plan to cut their spending and save 70% of their combined income so they could quit their jobs and travel the country, living only off of the growth of their investment accounts.

Steve and Courtney retired in 2016 and 2017, respectively, with a combined net worth of $870,000. Despite not adding a penny to their investments in the ensuing half-decade, they are now worth about $1.2 million and don’t plan to head back to the office any time soon. 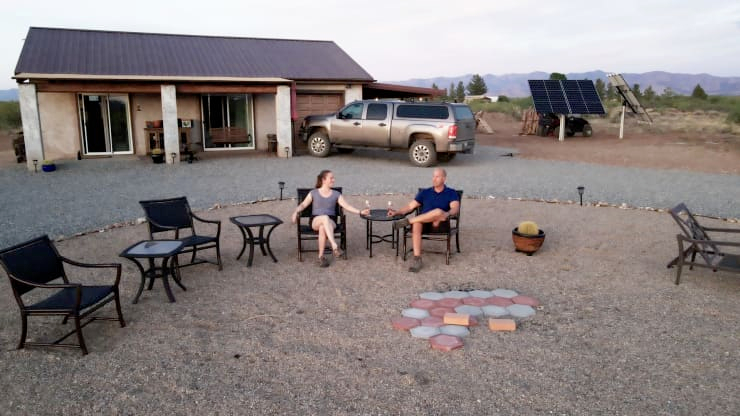 How the Adcocks retired in their 30s
In 2014, when Steve and Courtney decided to join the FIRE (financial independence, retire early) movement, their net worth was roughly $650,000, including the estimated equity in their home, which they planned to sell. They determined that they needed a total of $800,000 to $900,000 in order to retire in their 30s. They were bringing in around $230,000 combined each year.

Thanks to their high salaries, Steve and Courtney were able to max out their 401(k) contributions in the years leading up to their retirement. They also slashed their spending, eliminating monthly subscriptions and streamlining their grocery budget. “At one point we were saving 70% of our combined income,” Courtney says. They funneled all of the extra savings into a Roth IRA, brokerage account and savings account.

The couple also moved out of their 1,600-square-foot home in Tucson, complete with a swimming pool, and into a 2005 Airstream that they purchased for $42,000 in cash.

By August of 2015 their net worth was up to $775,000, and they eventually hit their goal in late 2016, a little less than three years since Steve decided he wanted to retire.

Courtney has always been more of a saver, Steve says, and even though retiring early was his idea, he had the harder time reigning in his spending habits. Perhaps the most drastic change they made was limiting their restaurant budget to $50 per month, a difficult task for Steve, a restaurant aficionado who says he once made a point to visit an eatery a day for a full year.

“Before we got married, I spent a lot of money. I had a supercharged Corvette convertible. I had a brand new Cadillac CTS. I had a Yamaha sportbike. I had all the toys,” he says, noting that they have all since been sold. Now, the couple shares one pickup truck, which they use to pull their Airstream when they travel around the country.

How they budget their money
Here’s a look at how the Adcocks spend their money as of April 2021. 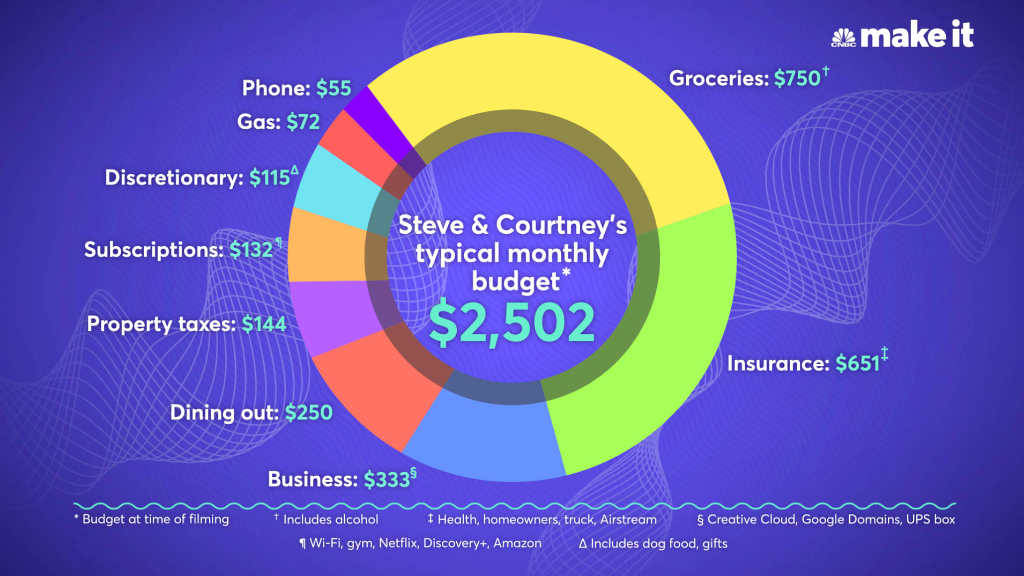 The couple have a combined checking account as well as a combined savings account, which helps keep their financial lives simple and straightforward, Steve says. They discuss every purchase they make and only spend money on things they agree on.

Because they don’t have steady paychecks coming in from an employer, the Adcocks are careful with their budget. Their two main splurges are on nice spirits, so that they can make cocktails at their home bar, and visiting each of the restaurants in their small town once a month.

They’ve also found other ways to eliminate spending, including moving into a 800-square-foot house on a 6.7-acre parcel of land in the Arizona desert, which they purchased for $72,000 in late 2019. They added a high-end solar panel array in October 2019 for $28,000, which keeps the house off the power grid and eliminates monthly electricity bills. They also have a septic tank on-site and collect rainwater, which lets them avoid water and sewer bills.

They spend about $500 combined for a health share plan, which gives them the ability to see any doctor at any time and be treated as a cash-paying patient. For dental, they periodically venture an hour south across the border to Mexico, where a cleaning costs around $25.