“…as green as it gets”? I would like to respectfully disagree. It’s unfortunate that “renewable” is now equated with “clean”, “green”, “healthy”, and “good-for-the-planet”.Yes, wood is renewable, but burning it as fuel has none of these positive attributes.

Is burning wood for heat really green?, where I concluded that it really isn’t. Yet lots of very green people do, including Alex Wilson, founder of Building Green, who knows more about the subject than anyone I know. So lets look at the issue in terms of this particular house. 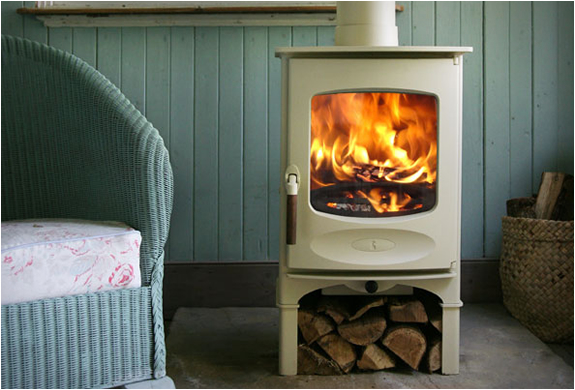 A few years back it was a standard argument that wood, being renewable, was a greener source of energy than fossil fuels. Environmental writer Mark Gunther called it A renewable energy technology that gets no respect. He called it ” a “green” technology that appeals to poor and working class people. And, because gathering and distributing wood is labor intensive, it’s generates economic activity.”

But that was before we began to realize what a big problem particulate pollution really is. The very impressive Families for Clean Air website spells out the dangers, particularly in urban areas. Sam Harris is pretty convincing too. They are not alone in complaining; Government sources like the Province of Quebec note that wood burning is the single biggest source of fine particles emissions, and how dangerous they can be:

Among all particles emitted by wood heating, the ones whose aerodynamic diameter is equal to or less than 2.5 micrometres (PM2.5) are of most concern for health. These suspended particles are so small that when inhaled, they cover the surface of the pulmonary alveoli and impair gas exchange, which impacts the respiratory and cardiovascular system by, for example, aggravating symptoms of asthma through the irritation and inflammation of the bronchi. Winter smog, of which residential wood heating is a contributing factor, is mainly comprised of fine particles